Also following what seems to be police standards, they didn’t even kill it. With this poor marksmanship, you have to wonder who the REAL threat to public safety is.

This is a humorous look at the media narrative surrounding the Zimmerman trial: 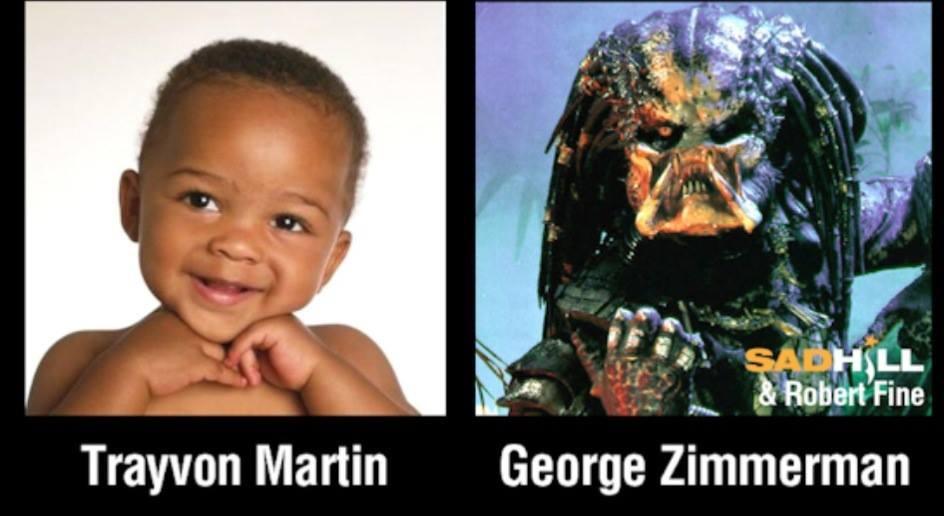 So we have death threats from blacks against whites. We have witnesses in the Zimmerman case saying that Trayvon Martin called Zimmerman a “creepy ass cracker” and many blacks claiming that the term isn’t racial or offensive because “that is just how black people talk.” Now we have a North Caroline County commissioner saying that white men need not apply for a vacant commission seat.

For years, we have heard about how whites are racists, and any time something bad happens to a black person, a white person and his racism are to blame. We hear that whites are all racists, and blacks cannot be racists, all the while ignoring the fact that we have a black President, which could not have happened if all whites were racists. I heard that President say that it is time for us to have a discussion on race, and say that he was going to unite us. I also heard him say that if he had a son, that son would look like Trayvon Martin.

Race relations are worse now than any time I can remember since the Rodney King riots.

There is a buzz on Twitter that if George Zimmerman is acquitted of murder in the shooting of Trayvon martin, that they are going to “kill some crackas.” Here are some examples:

If Zimmerman win, I’m gonna go kill a white a kid by mistake

If Zimmerman get off, Ima go kill a white boy and use the same story he did…

When this case goes to the jury, there are large areas of town that I am going to avoid until this all blows over. We may see violence and riots should he be found not guilty. Living in the Orlando area puts me squarely at ground zero for any problems.

For those that have been following this blog, you know that I bought a home in 2007 for $240,000. In 2009, I realized that I was having my financial life ruined by my possession of a depreciating asset. My home was worth less than half of what I had paid for it. I decided to cut my losses and declare bankruptcy and give the house back to the bank.
The problem is that the bank I borrowed the purchase money from, and had been making payments to, was not the owner of the note and mortgage, even though they had testified in bankruptcy court that they were. Not only that, but they continued to try and collect money from me, even though the debt had been discharged in the bankruptcy. They left notes on my door asking me to call them. I would call,  and they would ask me to pay. They would mail bills to me. Since this isn’t allowed after a bankruptcy, I sued them, and we settled out of court. They paid me a large sum of money to drop the case.
They tried to foreclose on the house, but could not, because they don’t own the mortgage. The foreclosure was dismissed.
They were one of the banks that the government was investigating for forging legal documents. As a result of that, I was paid another $4,000 in a settlement.
They continued to badger me for money for two more years, so I sued them again two months ago. I won another $14,700 from them. The judge also ordered them to have no contact with me. The day after we went to court, I found a note on my door just after lunch, asking me to call them. The day after that, I got a letter demanding money.
I guess we are going to give them some time to violate the court’s order a some more, and then we will be going back to court.
So far:
I’ve been living in this house for free for four years.
They have paid my property taxes for the last 4 years, even though they are not the mortgage holder, and I did not ask them to pay them.
They have paid me approximately $30,000 in settlements and sanctions.

and yet, they continue to break the law and violate the court’s orders

I have been chasing down the RFI coming from my house. A touch lamp, a television, and a cable box have all been identified as sources of RFI in the house. The lamp has been replaced, and the television is going to be my next project, but for now I can turn it off when I am on the radio.
Yesterday, the cable company came out and replaced the cable box. The RFI in the house is now showing at S0-S1. Now I can finally enjoy some productive radio time.

There is an interesting case in New York involving an EMT and a pregnant woman with asthma. The asthma patient had been seen earlier in the day by paramedics for her condition and had refused to be transported for evaluation. The EMT, who was working in dispatch for FDNY, was on a coffee break when the woman nearby began having an asthma attack. Bystanders, frantically looking for help, saw the dispatcher in uniform and asked her for help. The dispatcher called 911, but refused to get up and evaluate the patient. The women died.
FDNY Was sued by the dead woman’s family, and the EMT was charged with the crime of negligence. To protect itself from the lawsuit, the FDNY claimed that dispatchers on break do not have a duty to act, and asked that criminal charges against the EMT be dropped.
My personal feeling is that when you are on the clock and in uniform, you do your job, even if you are on a coffee break. This EMT should have tried to do something. Even without equipment, she could have performed CPR.
Off the clock, I agree that you don’t have a duty to act. Heck, I quit stopping at car accidents about ten years ago when a paramedic in Central Florida who stopped at a car accident was struck and killed by oncoming traffic, and the State of Florida refused to pay the widow his death benefits
because he was not on duty.
In this case, this EMT got lucky that her employer needed to avoid legal liability more than they wanted to prosecute her.

This video astounds me.

What this guy is saying could easily be construed as murder. He wants you to make sure that anyone who enters your home is dead. He says to either shoot them in the head, or after shooting them, go back to bed for an hour or so before calling 911, so that you can let them “bleed out.” Here are some of his statements in comments:

When someone﻿ breaks into your home in a home invasion at 3:00 a.m. they
are not another individual, they are a predatory puke who is there to
kill you and your family. Don’t you pay any attention to the news? Don’t
you know what happens to homeowners and their families in home
invasions?

When a person enters your home in a castle doctrine state, the law presumes that the homeowner is facing a deadly threat, and allows the homeowner to use deadly force. That presumption disappears if the state can prove that  you deliberately allowed a person to die after they were no longer a threat. An attorney in the comments says effectively the same thing, and this is his response:

What will your hourly charge be to defend a so called CLEAN SHOOT? I
betcha if you are an attorney your charges will be a lot. If I dispose
of the body I don’t have to pay them.

This video will be used against the maker to show premeditated murder, even if the shoot is a proper one. Stupid, stupid, stupid.

Look at another video he produces:

At 1: 34, he says that he keeps his Sig 220 in a “combat ready condition” where it is loaded and the hammer is back. This guy is a total dumbass. This is a double action pistol with no manual safety, no grip safety, and no safety built into the trigger. He fingers the trigger and sweeps the camera multiple times before clearing the pistol. This is a negligent discharge waiting to happen. He goes on to say:

I haven’t taken this thing apart yet, and have no desire to. My guess is that this lever (indicates takedown lever) releases it, and it comes apart like a Glock.

This guy supposedly runs a training academy. I seriously hope that no one takes his advice, because they will likely wind up in jail. Anyone who has attended this school that is involved in a shooting better hope that the prosecutor doesn’t find out about it, because they will be in a world of trouble.

The east coast of the US, specifically New Jersey, was struck by a tsunami on June 13. I had no idea.

I bought a Quantum car. Now every time I look at the speedometer, I get lost.