AS the year ends, the thoughts of many Americans turn to taxes.The new one for this year is the Obamcare tax. I choose not to have insurance, because a $300 a month insurance bill for a policy that doesn’t pay a dime until the $6,000 deductible is met just doesn’t make financial sense.

There is a way to get out of the Obamacare tax, as there are 14 reasons to receive a hardship exemption. Here they are:

The easy route, using #3:
1 Do not pay one month’s utility bill each quarter
2 wait for shut off notice
3 pay bill the next day, before utility is actually shut off
4 mail shut off notices in to IRS
5 receive exemption, save hundreds or thousands of dollars

There is an application, which can be downloaded as a PDF here. From Healthcare.gov:

My brother is a business owner.  Just over a year ago, I blogged about him and how Obamacare was affecting small business owners.

Now a new problem. My brother pays his workers $10 an hour (which is $2 per hour higher than minimum wage) plus a percentage of profits that are earned as a result of the worker’s labor. He employs ten, and the highest earning of them made $42,000 this year, meaning that they are making more in profit sharing than they are in salary.

That will come to an end in 2015, when all workers will go to an hourly rate of $14 an hour. Why is that? Is it because my brother is a greedy business owner? No. It is because one of his workers has been sleeping on the clock.

One of his workers was caught taking naps while he was clocked in, and this caused that employee to work more than 40 hours a week. When caught, my brother fired the man. The man filed a complaint, stating that he was not paid properly.

My brother pointed out to the DOL that the employee was paid fully for the time he was on the clock, even while sleeping. The DOL disagreed. They said that ALL funds received by an employee on a regular basis must be a part of the overtime calculation.

What does this mean? Let’s say that your employee makes $10 an hour plus profit sharing. He works 42 hours a week. That means that his “time and a half” overtime rate should be $15 an hour, right?

Wrong. Since the employee got $400 a week in profit sharing, his hourly rate works out to $25 an hour, making his overtime rate $37.50 an hour. So an employee that made $400 in wages and $400 in profit sharing for weeks on end, and then takes a nap and winds up working 42 hours when he oversleeps the end of his shift by two hours, winds up deserving an extra $75 for his two hour nap.

My brother cannot afford this, so profit sharing is coming to an end at his business.

This is why the little guy can’t make it.

In July, blacks were protesting Obama’s immigration policies, and were even calling him ‘the worst President ever.’ Protesters began referring to Clinton, and how he cared more for the black community.

In August, a black teen is shot in Missouri by the cop he was attacking. The press runs with it. Protesters appear with professionally made signs, and are bussed in from hundreds of miles away.By September and into October, the protests had spread to other cities.

The situation has escalated to the point that police officers are now being murdered in the streets, and black people are cheering over it.

Now we have the movie ‘Selma’ that is being released to show how blacks were discriminated against and overcame the adversity.

This appears to be a well orchestrated, well funded campaign to distract and redirect the blacks in America. We as a nation, and blacks in particular, are being manipulated. To what end? Is this merely a distraction to bolster Obama’s sagging approval poll numbers? Is this something more? Something else?

Get off the Internet and go enjoy some family time.

So the Republicans are planning on having either Jeb Bush or Mitt Romney run for President. They will never learn. You might as well get used to hearing about President Clinton again. President Obama, the narcissist,  has given Bush his permission to run, at least.

If you run Huckabee Bush or Romney in the 2012 2016 election, you are not getting
my vote. I am through with voting for the same old crap simply because
that person will take away my liberty at a slightly slower rate than the
other guy. I am also tired of seeing the same old, tired candidates in every election.

Many people keep saying that I am throwing my vote away unless I vote for the R candidate, because a third party candidate can’t win. I have news for you, telling me to vote for a douchebag that can’t win, simply because he has been anointed by the Republican party establishment doesn’t mean that he can win, only that he has bowed down to the big money in charge of the R party.

I love the definition for “Zumbo” and especially love the term “Zumborrhea,” which is listed. I am going to try and use that in a sentence this week.

This week, I have been giving mid term exams. My test in Biology has 80 questions: ten true/false, and seventy multiple choice. There are four versions of the test, so that the kids who sit next to each other cannot cheat of the tests of their neighbors. Two of the tests begin with the true/false section, and the other two end with it. 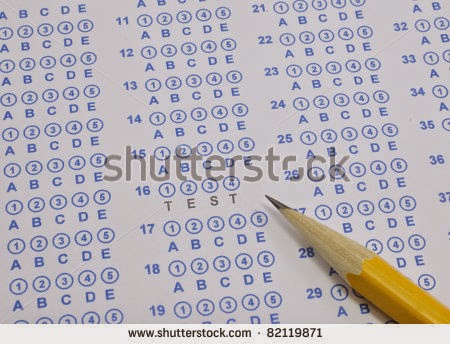 The test is done on Scantron sheets. The very fist question on each sheet says “KEY ID” and the students are supposed to mark which version of the test they have. One student did not do so, meaning that the test will now have to be graded by hand. In trying to figure out which answer key to use, I look at the test to see if the student’s test began or ended with the true/false. The true/false questions are answered by filling in the first or second bubble, respectively, so any of the first ten questions that are answered by filling in a ‘C’ or a ‘D’ are not true/false.

The problem? NONE of the student’s tests appear to have any true/false answers. This indicates to me that the student didn’t even attempt to take the exam.

This is one of the reasons that education fails in this nation: The students don’t want to be educated.

You can lead a child to knowledge, but you can’t make him think.

So I went to WalMart to get some ink for my printer. I paid for it, and on my way out, the inventory control system began sounding. I was in a hurry, so I kept going. I have places to be,and was in no mood for this nonsense.
The door guard began yellg at me: “I need to see your receipt!”
“Sorry, I don’t do that,” I replied.
I was then followed to my car by about 5 WalMart employees. I was half expecting them to physically detain me, like Best Buy employees did to this unfortunate man.

I have to say that at the point where the employees blocked my exit, I would have still refused to show a receipt, and waited until the cops arrived. Then, after the police officer verified that I had not stolen anything, I would have demanded that the police take a report. That report and I would have been in my attorney’s office the next day for unlawful detainment/arrest.

In this story, the store employee putting his hands on you, or your property, he is now using force. In the state of Florida, this is an illegal use of force. At that point, the employee of the store is committing a crime. At the very least, simple battery. I would ask store owners to think about what that means from a liability standpoint. One lawsuit can make up for a lot of recovered merchandise.

Costco was sued for $670K in 2013 because a loss prevention employee accused the customer of shoplifting and broke his leg in the process of detaining him.Of course, there are those who will say that a person agrees to be searched as a condition of his or her membership, and that is certainly true. What is also true is that no one has the right to use physical force while enforcing a civil contract.

I have had enough of stores demanding that I prove I am not a thief when I shop in their establishments, especially in light of the fact that more than two thirds of lost inventory is NOT caused by patrons shoplifting, but nearly half is caused by employee theft.

In other words, the employee inspecting my receipt is more likely to be a thief than I am.

In my case, I simply got in my car and watched them write down my license number, I suppose to report me to police. However, it is not illegal to refuse a search, so I expect that I will not be hearing from the law, just like the last time.

We were shopping for a gift for the 10 year old child of a friend. That child asked for a long list of odd presents. One of the items on the list was a pop corn popper. As a joke, we bought her a Jiffy Pop. She probably won’t get the joke, but her mom will. (Don’t worry, we got her a real gift as well, her feelings won’t be hurt)

As our South American population increases, we are becoming more and more like the third world hell holes that are south of the border. In this case, a border patrol agent is caught accepting bribes to help a cartel import marijuana into the country.