Windows 10 may be free, but the program is uninstalling software from Microsoft competitors, without owner permission. Bug, or way for MS to eliminate competition? You decide.

The problems with Windows 8 and 10 are a few of the reasons why I switched to Linux.

The comments to the article are stunning:

it uninstalled Android Studio from my pc —

this f**king s**t removed my antivirus! MY ANTIVIRUS!!! They do it just to force users to use their s**t called Defender…

Win10 not only deleted Speccy, but also Ccleaner. Both worked fine upon reinstallation. This freaks me out and I’m planning on dumping 10 and going back to 7 soon.I’ve also had a problem with Win10 when inserting another drive with a different OS. ++

My roommate bought a Toshiba 2 in 1 laptop at Best Buy a couple weeks ago loaded with 10. After getting all the updates installed for windows, he woke up the next morning to find that it had uninstalled his touch screen, bluetooth and wireless network adapter drivers. He paid microsoft the $25 required for their tech support and they basically told him that Toshiba’s drivers weren’t properly signed/certified and thats why they were being removed and then gave a crappy speech on how he agreed that MS could do this when he agreed to the eula when starting the the machine for the first time and how he needed to get with toshiba instead to fix the issue. He had to take the machine back for a refund.+++

It also appears as if MSFT is uninstalling older versions of their own software, so that they can force you to buy new software:

You do also have to be careful with Office, as the old version may be removed as it has been deemed technically incompatible with 10 for some reason

Windows 10 was the last straw. I decided to get away from Windows.

In April, I installed a NAS that was fully redundant. That allowed me to save files across platforms. All of my devices are now working with the same exact files, all of which synchronize with each other. No more thumb drives, and I am always working with the most recent version of any file.

Two weeks later, I tried to change over to Ubuntu. I decided that I didn’t really like it. I then tried Linux Mint. I am running the MATE version of Linux Mint, and it is a great OS. After using a Windows based system since Windows 3.1- which came out in 1992, I have a bit of a learning curve, but I have already gotten the new system to do most of what I need it to do.

There are many people who think that a property owner has the absolute right to control behavior on their property. To those people, I say that this is the logical endpoint of that line of reasoning:

In 2013, a young lady was stabbed and attacked in a Target store. Other shoppers chased the criminal away with a baseball bat, and saved her life. One of those heroes was Michael Turner.
But instead of thanking Turner for his actions, Target just announced they are SUING HIM! Why? Because he endangered other shoppers by using the baseball bat against the thug.

This is why I do not respect ANYONE who would attempt to disarm me. Corporations don’t care about their customers, their employees, the law, or anything else other than profit. Protect yourself, because no one else will.

As summer approaches, teachers are all taking their required summer training. For me, this means that I am taking ESOL (English Speakers of Other Langugaes) training. This training is a 60 hour course that all teachers are required to take.

It is filled with blatant propaganda. Here is a film that we are being required to watch. In this film, we are being introduced to Moises, an illegal immigrant who entered the country illegally by climbing over the border fence with his family. The film depicts schools that are ignoring kids that cannot speak English. Watch it to see how people are being manipulated through careful propaganda.

Here is the assignment that goes with the film:
Write a response that answers the following questions: (What I want to say is in red, but I can’t say it without losing my job)

What are some of the issues that this video brings to your attention?
Illegal immigrants are sneaking into this country, and using up large amounts of resources that could be utilized to educate the children of people who are actually paying taxes.

What steps could be taken to support Moises in his testing?
Send him and his family back to Mexico, where school is taught in the language he understands.

Why do you think the schools don’t take those steps?
Because resources are limited, and it takes far more of those resources to educate someone who must also be taught the language before the lesson can even begin. This is inefficient, and the school has to teach certain skills. To teach students who aren’t even here legally English leaves fewer resources for the actual skills to be taught.

Do we do anything in our district to help ELLs like Moises?

Sure, we can take scant resources and use them to educate these criminal families (make no mistake the film showed Moises and his mother scaling the border fence to enter the country, thus making them criminals) at the expense of the people whose families are following the law and providing those resources.


Those opinions would get me fired.

This picture is photoshopped: 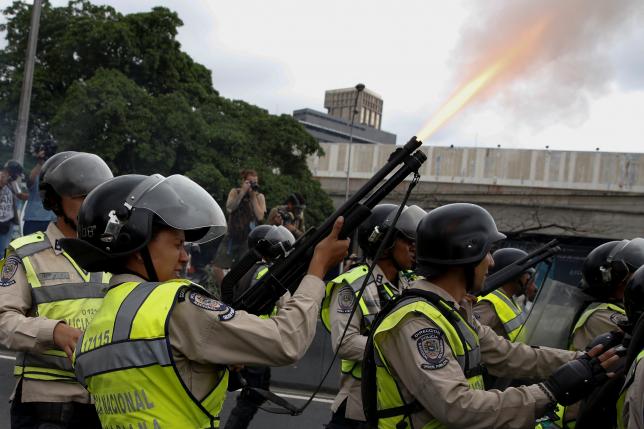 It was found here. Look at the muzzle flash. It is pencil thin where it leaves the muzzle, where it is less than half the diameter of the bore. The news seems to be more fake than real these days. I keep wondering how much of our news is disinformation.

From this article on “The Campus Rape Myth” 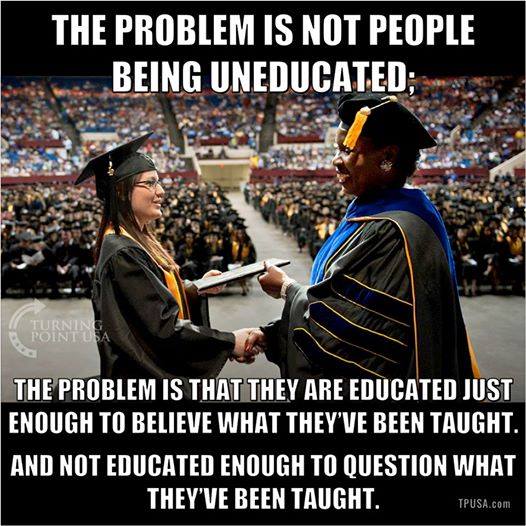 A male rapes his 18 year old, developmentally disabled stepdaughter, and she is later found dead. The cause of death is that her throat was cut, after which the house she was in was set on fire and her uterus was cut from her body to hide the evidence of the stepfather’s crime. The girl’s mother is suspected in the murder, as the stepfather was in jail at the time.

A mother killed her pregnant daughter, and then cut out her daughter’s uterus to prevent her child molesting husband out of jail. Of course, since the crimes committed did not involve a firearm, that is is just fine with the anti-gun people, as it is not a “gun related crime” and thus does not matter.

There was a man in the Orlando area by the name of Henry Brown. He and his wife had separated, and he began stalking her. He put a GPS tracking device on her car. He threatened her. She went to court and got a domestic violence restraining order.

He followed her constantly. On at least two occasions, he was caught by a Deputy violating the restraining order, but the Deputy and prosecutors chose to do nothing about it. Officials said there were constant injunction violations from January to April, which went unreported, based on interviews with family and friends after the murders.

What happened next was a travesty. He found his wife’s car at a Chili’s restaurant, and hid in the trunk of her car as he waited for her to exit the eatery. Once she came out of the establishment, he confronted her and stabbed her multiple times before fleeing. Two bystanders, one a nurse and the other a paramedic, tried to render aid to the woman. That is when Brown returned in his pickup truck and ran all three of them over.

All three were injured, two of them seriously. The wife was taken to Central Florida Regional Hospital, where she died of her injuries. In the interim, the suspect went to the babysitter’s house, picked up the couple’s two children, and went to the hospital in search of his wife. Deputies who were there recognized him, and this is what happened next:

Brown escaped in his truck and was found a short time later. A police chase ensued, which ended when stop sticks were employed. When police approached the vehicle, they found him with his one and four year old children, all three of them dead from gunshot wounds.

1. To people with an anti gun agenda, the paramedic, the nurse, and the wife’s injuries and death do not count, because they were not related to guns. He used a knife and a pickup truck as his weapons. We see this often in the anti gun community, where they trot out the metric of “gun death” to claim that countries who outlaw guns see a decline in “gun death” but the ignore the fact that murder rates either remain unchanged or actually rise after strict gun laws are passed, thus proving that only “gun deaths” count.

2. A judge in Seminole county issued a domestic violence restraining order. It did no good whatsoever. These orders do nothing to prevent domestic violence, and are only used to persecute the innocent in messy breakups, mainly by women against men. The truly violent people simply ignore them. In this case, the judge who granted the order said this:

In this instance, the judge did everything in her power to enjoin Mr. Brown from having contact with his spouse, and yet he did. These deaths are tragedies that a piece of paper could not prevent.

Even the judge concedes that a DV order doesn’t prevent this kind of violence.

3. Since he was under a Domestic Violence Restraining order, it was against both Federal and State law for him to be in possession of a firearm or ammunition. It was against the law for him to hide in his wife’s trunk, and it was against the law for him to try to kill her, their children, the bystanders who came to his wife’s aid, as well as the people who were at the hospital. In all, Brown violated the law no fewer than 27 times that day, with at least 14 of those violations being felonies. None of those laws mattered, and passing yet another law would not have prevented this, or even changed the outcome in a meaningful way.

There were a host of errors that led to this disaster. There were dozens of times where people could have reported what was going on and prevented this, but chose not to. The people who did report crimes were ignored.

In the end, the only one to blame for this was the evil man who changed a dozen lives, and ended three of them, besides his own. Some people are just evil. That is why I choose to carry a weapon for the defense of myself and the people I care about.

ccbpc asked a question, and I will answer:

Not sure what you’re using your puters for, but $1100 is an awful lot. I built mine over 5 years ago, Asus mobo, AMD Callisto dual core processor overclocked to 3.4 GHz, 8 Gb RAM, 1 WD 500 Gb hd, with case, dvd burner and power supply I was out $545. It still works like a brand new one right now. More money doesn’t necessarily mean a better product.

As far as my old computer goes:

With this new system, I am looking for a 17 inch laptop. I challenge you to find a decent one for less than $1K. I’ve been looking.

As far as Ubuntu, I have an 8 year old laptop that I am experimenting with.