Anti gunners are so violent

MORE bullshit from gun nuts!!! You claim there is REPORTS that Lilly has done this before, show it to me. Where’s the proof. The only person who made that claim was the asshole that shot Lilly. You believe him why??? Stupid people need to stop posting crap when they are clearly clueless. OK, go check my spelling now asshole.

The full police report can be found at the end of this post. The wife of the man who shot the dog said in her statement to police:

“This dog has attacked us in the past, and previous complaints have been placed with the city,” she said in a sworn written statement. “The dog never injured me or any family member but always charges us.”

Carabin said her husband intended to “scare the dog away.” Burdock, who called Animal Control concerning Lilly about a year ago, recently underwent back surgery and was carrying the gun for protection.

The wife was not the only witness to corroborate the shooter’s story. Here  are some more facts:

witness Richard Blake Frazier said “She did not have (the dog) under control nor was she close to the dog. The dog was well out of arms reach.” The officer said had she had her hands as close to the collar as she said she did, she would have been shot. She was not shot. The short barrel of the gun would allow the pellets to expand as they exited from the barrel, and with her not receiving any injuries from the shot shell or being hit by the shot shell (approximately 135 pellets in one shell) she was not as close to her dog as she believed.

To illustrate, here is what the shot pattern looks like from a .38 Special revolver fired from 8 feet (courtesy of the Box O Truth): 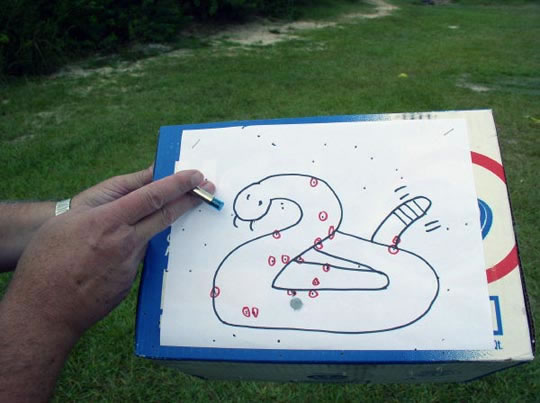 If you look closely, you will see that the shot pattern covers most of an 8×12 piece pf paper. I count at least 38 hits in the area of that paper. If this woman’s dog were really 12 feet from the shooter, and she was less than 2 feet from the dog, it would not just be the dog’s eye that was hit. The dog’s entire face, and the dog’s owner, would have caught a few dozen of those pellets. Looking at the Xray on the news page, it looks as though the dog got about 45 pellets to the area around its eye. This indicates that the dog was closer than 8 feet from the muzzle of the weapon.

On top of the other two witnesses, there is a third. Zachary Blair (witness) said she was 5 feet away, while the shooter claimed the dog was 6 feet away. The officer stated in his report that he believed the dog was closer than 12 feet due to the dog receiving her injury in one localized area. If it had been further away, the BBs would have covered a larger area of the dog’s body.

The dog’s owner herself admitted that the dog was not within her control and was not on a leash, as Winter Park law requires: On the night of the shooting, the owner of the dog, Ms Christensen, stated that she didn’t put the leash on before she let Lily out of the house. She did’t put the leash on while standing in the street talking to Blair. She claims she only tried to put the leash on when Burdock and Ioana approached.

According to the statement of the owner, this is a rescue dog. Dogs that have been rescued from abusive homes are frequently aggressive towards people who remind them of their former owners. Just because this dog was gentle with some people, does not mean that it was gentle with everyone.

Notice that the commenter uses the word “gun nut.” This is obviously a case of people just not liking the fact that a CCW holder can carry a gun in Florida.

Here is the police report: 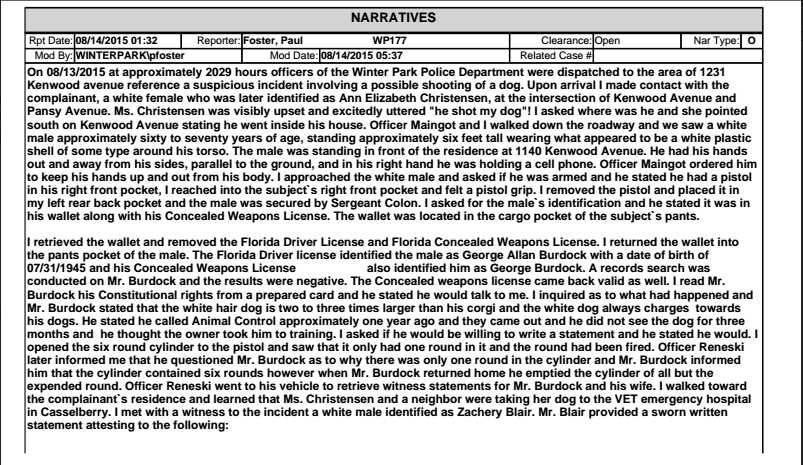 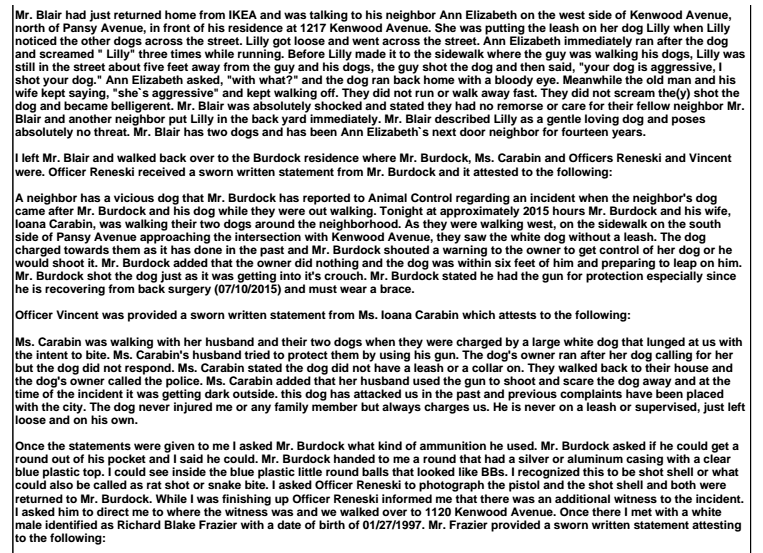 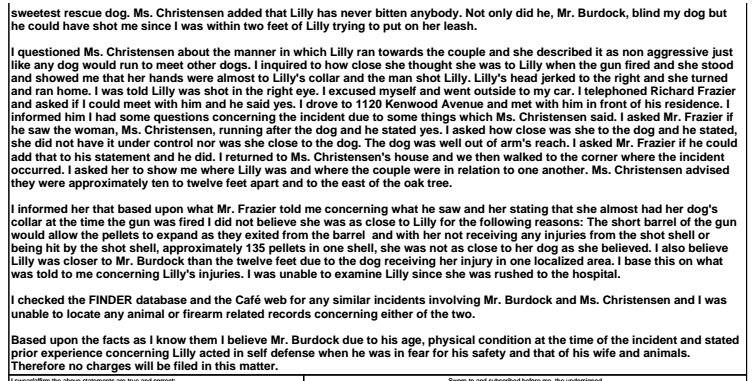