So my computer issues, which I thought were being caused by updates changing my settings, was something else.
Sound was very broken and static filled. Playing videos would slow the computer so much that it sounded like a 45 RPM record being played at 33 RPM, for those of you that remember records. Doing anything would bog the computer down so as to make it unusable. I thought for sure I had some sort of device or driver conflict.
I would only have problems for an hour or so a day, as I tried to fix it until I got frustrated. I finally decided to take it in to be repaired. When I got it there, the computer worked fine. The techies at the computer shop couldn’t find anything wrong.
So this morning, it was acting up again, and I was sitting here trying to fix it when my wife asked what my battery level was. I told her it was 88%, so she said her computer was at 25%, and asked to use my charger.
As soon as she plugged the charger in, she got a warning that looked like this: 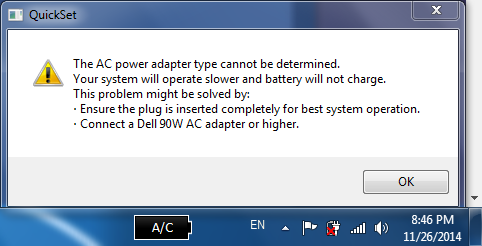 She showed it to me and said “Maybe something is wrong with your charger.”

Since my laptop was running on battery, I tried to run a video, and play a game. Both worked flawlessly. I checked both chargers that we own (our laptops are identical) and they both do it. Since they are $18 each, I ordered two new chargers, and we will see if that fixes it. It runs fine right now, as long as I run it on battery power.