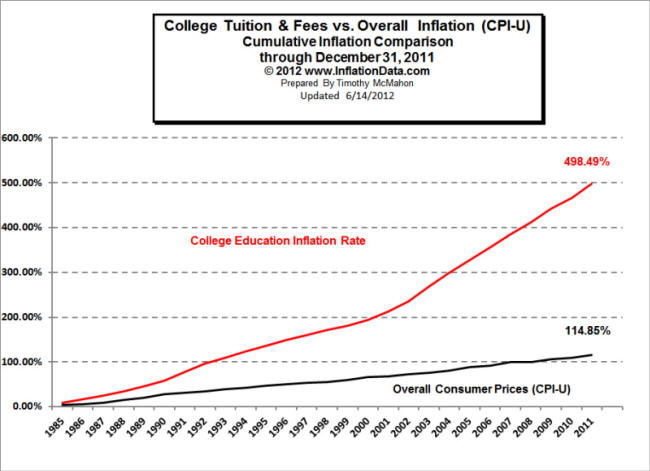 Abraham Lincoln took the Bar exam, and never even completed the third grade. It wasn’t until the colleges convinced the government that they should mandate a college degree in order to practice many careers that college became the large business it is today.
In the 1980s, it was possible to be a Physician Assistant with only an Associate’s degree. Now it requires a Masters. The school itself is still two years, but it now requires a Bachelor’s degree for entry. What the degree is in does not matter.
Nurse Practitioner was a master’s program, now it is becoming a PhD program.
Registered Nurse is fast requiring a profession requiring a BSN.

All of this increases the pay that people expect to receive for these careers, and therefore the costs of the services. Instead of being angry at what health care costs, the public should be angry at what it costs to be a health care worker.

In 1950, only one third of the adults in the United States had a high
school diploma. Many of the adults were blue collar factory workers and
made a good living. Only about 1 in 20 adults had graduated from
college.
That was before education became big business. School became easier, and
kids were passed on to the next grade, not because they had mastered
the skills needed, but because teachers were afraid of damaging the
kids’ self esteem. In 2010, 80 percent of adults were high school
graduates, and 20 percent had a 4 year degree or more.
The latest generation is flush with college degrees that mean little,
because many schools are offering degrees in things that are not needed
job skills. Because we have all of these degrees, we are demanding high
wages, and this has driven the blue collar jobs out of the country.
Unemployment is rampant. At the same time, we are paying people the
equivalent of $10 an hour to sit at home for up to two years, so there
is little to no incentive for work.
Instead of making things like cars and appliances, we sit around and
make war and college graduates with degrees in French Poetry and Women’s
Studies.

Linked back from my place.