Shortly before noon on June 8, 1959, the first official dispatch of U.S. Mail was launched from the guided-missile submarine USS Barbero (SSG 317), from international waters off of the Atlantic Coast.  Twenty-two minutes later, the Regulus I Missile, carrying 3,000 pieces of mail (postcards), landed at the U.S. Naval Auxiliary Air Station, Mayport.  Among the officials present for the event was Postmaster General Arthur Summerfeld, who stated, “This peacetime employment of a guided missile for the important and practical purpose of carrying mail, is the first known official use of missiles by any Post Office Department of any nation.” He proclaimed the event to be “of historic significance to the peoples of the entire world,” and predicted that “before man reaches the moon, mail will be delivered within hours from New York to California, to Britain, to India or Australia by guided missiles.  We stand on the threshold of rocket mail!” 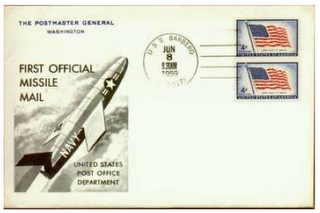 People who have read this post: 329
Categories: Uncategorized
Tags: Geekery

And yet – it took 3 days for something I mailed last week to get to St. Augustine…