I didn’t know my finger was on the trigger

Another report of a police raid gone wrong. This time, instead of a dog, a child is killed. Without going into the reasons for the raid, and the wrong-headed approach of militarizing our police, I want to talk for a minute about the basic problem here:

Read the comments on the article:

The father said police had the wrong house yet they found the suspect and his moped at that residence. The “woman” and the police officer had a confrontation and the gun accidently went off, striking the child. You dont seriously think the police went into that house and intentionally shot a child do you? Really?

It’s heartbreaking what happened, But Police need to arrest suspects promptly, Unfortunately there is a family of a dead 17 year old that need to know who the killer is. You go into a house to arrest a killer, you go in full force, no f ‘ n around. When the lady physically engaged the officer it became the parents problem. Harboring a murderer in a house with your daughter living there. Who is really to blame?

The police officers that perform these raids are supposed to be the best trained officers on the force. Surely they have been schooled in the four rules? Surely they are aware that when you carry a firearm, you are responsible for EVERY bullet that comes out of that gun. 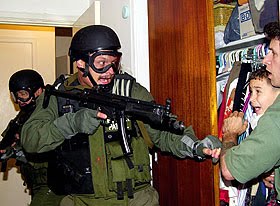 Police officers are supposed to protect children and innocents, not gun them down. The lady who engaged in a physical confrontation was not deserving of a deadly force response. The cops there cannot deal with a woman without discharging a weapon into the head of a 7 year old girl?

Maybe it is time to take that SWAT option away from the cops. They have proven unworthy of wielding that sort of force, at least in Detroit, MI and Columbia, MO. Maybe other places as well.

It is easy for a SWAT team to intimidate children and women, but as the failed ATF Waco raid, and the  SWAT officers killed in ambushes of SWAT teams show, they come out on the losing end when engaged by any sort of real resistance by people who are unimpressed by fancy uniforms and high tech gadgets.