During the storm, we began seeing reports of looting in south Florida. Some were reported by the local branches of the MSM, with video. Some, it turned out, were false. For example, this came out from one sheriff’s office:

You may have seen a post on social media that citizens are being robbed at gunpoint in their homes by individuals posing as electric workers. Beware of internet/social media rumors, we have not received any calls regarding this. Utility workers will be out to do damage assessments as soon as it is safe to do so and AFTER the storm has passed. Right now there are three times the amount of deputies on the road to keep you safe during this storm.

A market in Tampa was looted by thieves who backed a stolen truck through the front of the store.

My wife returned to work today to find out that at least three homes of coworkers and students had been looted while the power was out.

The second powerless night at our home, we were sitting in the living room with all the doors and windows open for cooling, reading books by LED lantern when BOOM a loud report sounded outside, I told the Mrs to shut off the lights and, as I got up, BOOM a second report sounded. I grabbed my AR15, turned on the EOTech sight and ran outside to take cover by the car. My immediate thought was that a neighbor had caught some looters.

Then a third report, with a bright flash coming from one street over. About the time that registered, a starburst shell popped overhead. Fireworks. My wife logged into the Facebook Page for the neighborhood watch and complained. Shooting fireworks during a disaster with a blackout. The reason they gave? The guy said it was his wife’s birthday. “Besides,” he said, “the kids loved it.” My wife told them that this was inappropriate with everything that was going on. She was answered with the following picture from the neighbor who was shooting the fireworks: 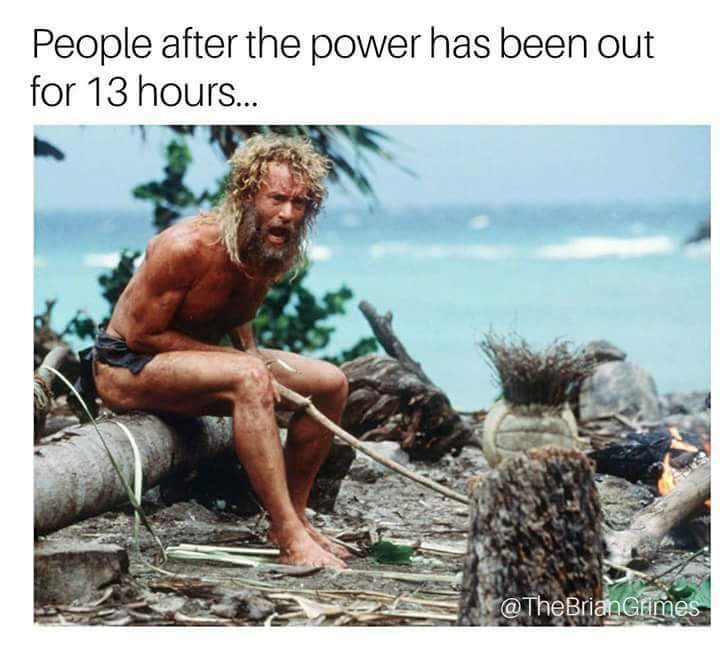 Some of my neighbors are ignorant assholes.

That picture really resonates with me.

Same thing with fireworks with me. The idiots were doing it in the middle of the day, behind my apartment.

They did not like having an angry fat guy explain to them exactly how stupid they were.

After I finished, the three cop cars that came screaming up expecting a SWAT callout were full of very unhappy civil servants quite willing to explain, for a long (and very loud) time exactly how stupid the people were being.

It was a joyous sight to behold.