My long review of the MTAC holster system

Nearly three weeks ago, I announced that I would be buying an MTAC holster from Comp-Tac so that I could carry my new M&P handguns with a tucked in shirt. To go with the holster, I bought a list of products, and I have spent the last three weeks putting them through their paces. I bought an MTAC holster, several Kydex bodies, a belt, a magazine pouch, and a few odds and ends like c clips, etc. I tried them all out with three different handguns: an M&P40, an M&P45, and the M&P Shield.

First, the holster. It cost $85, and comes with one Kydex body and your choice of two belt clips. I wore this holster while performing daily activities with a tucked in dress shirt, a tucked in polo shirt, and an untucked t-shirt. I hwas pretty happy with the way that handguns disappeared under a dress shirt. All that is visible is the two small plastic clips that hook over the belt, and they blend in with the belt, as long as you get clips that are the same color as the belt. I tried wearing it with a tucked in Polo shirt, but I was printing too badly to make that one work.

I was holding seminars in front of a crowd, and afterwards I asked several attendees who also carry (one was a SWAT medic) if they had noticed any printing, and they did not. If fellow gunnies (men and women) who were staring at me all day didn’t notice, then I call that a concealed success. Here is a picture of the holster, containing an M&P40, in place on my waist: 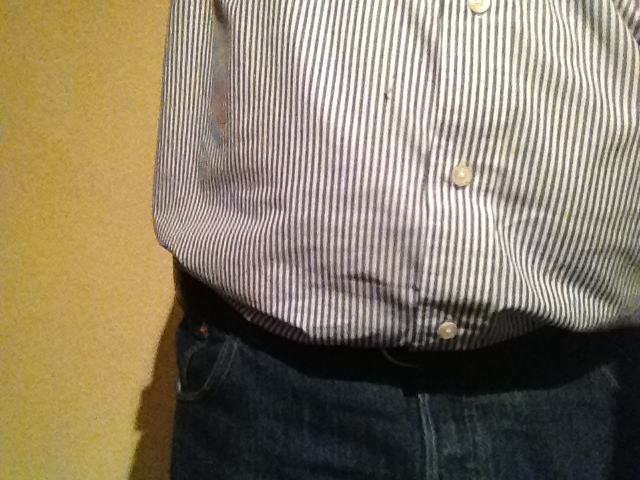 The holster has a slight forward cant, and it was very comfortable for all day wear. The body shield prevented even my M&P45 from digging in, and when I was carrying the Shield. At the range, my draw was still quick enough, and the shirt wasn’t that difficult to clear out of the way.

There are spare clips available for the holster, and being attached to the holster with a single Allen screw, they are easily changed out. Each holster requires two of them. They even include the wrench with your order (along with instructions and a pack of Smarties). If you are going to use the regular clips and wear belts of different colors (brown, black, etc.), I would suggest getting clips in different colors, to aid in making this system blend into your wardrobe. There is also a C clip available (which I also bought), but I didn’t see where those were any better than the standard clips. They are the same price as the regular ones, so it doesn’t matter which ones you get. The C clips are available in black and brown, and the regular ones are available in four different colors.

I wanted to see if I could get the clips to disappear, so I bought a Kydex reinforced belt with a Velcro lining, and I got some V clips to use with it. The belt was $105, and the clips were the standard $8.50 each. The belt is pretty stiff, so you have to play with it a bit to get it to work. The V clips eliminate any chance of seeing the system, as they attach by the Velcro to the side of the belt against your body, thereby invisibly securing the holster to the belt. The only complaint that I have is that the sizing information is wrong. The instructions say to measure the belt that you currently wear and subtract two inches. Don’t. I did this and wound up with a belt that was too small.

The spare Kydex bodies enable you to own one holster and fit it to several handguns. At only $38, it allows one holster to fit several weapons at a fraction of the cost. I bought two spares, so that I had bodies for each of my M&P pistols: the M&P40, the M&P45, and the M&P Shield. They were fairly easy to change out (one of the nuts on the body for the M&P45 had to be grabbed with a pair of long nosed plyers- it was free spinning) and it took just a couple of minutes to do so. I like the concept, but changing the bodies out is just bothersome enough that it is not something that I would want to do on a daily basis. Still, it isn’t that difficult.

My only real complaint with the MTAC system is with the magazine pouch. It was $38.50, and when I tried to wear it, it tended to tilt forward to the horizontal position, because it is attached to the belt with only one clip. I only used it for a single day. I didn’t like it, and I will have to find something else.

So, what is the bottom line? You can spend $189 and get the holster, two bodies, and a spare set of clips (black and brown) and have a good tuckable holster that fits three handguns.Cost effective, I think. I also like the holster. If you decide to get the belt with the Velcro lining (which is what I recommend), you can order the holster with the Vclips already installed, and with the two spare bodies and the belt, the total cost will be $276.

People who have read this post: 320
Categories: Uncategorized
Tags: Guns

I've had one for a couple of years now and it's been great – extremely comfortable, very concealable, distributes the weight nicely and is good even in the 108 degree summers here. You'll like it.