No one wants to take your guns

We keep hearing that “no one wants to take your guns” and we all know they are lying. Here is a recent online exchange I had with an anti:


anti: If you don’t know then clearly you shouldn’t have one.


Divemedic: It’s a simple question. If you are advocating for a ban on something, you should at least be able to define what it is. Name calling just shows that you have no idea what you are trying to ban,


Divemedic: Let me show you why Wikipedia’s definition won’t work. Under the 1994 Federal Assault weapons ban, which of the rifles in the picture below would be illegal? 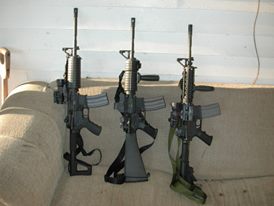 anti: Clearly all THREE should be illegal! If it were up common SENSE, all the small-brained, gun-loving, Fox-brainwashed Obama haters should have their weapons confiscated before they hurt themselves or somebody else.


Divemedic: See, that is where you are incorrect, and are only making my point that you can’t ban something that you can’t identify. At least one of the weapons above is not an “assault weapon” under the definition that you cited. As a side note, just how do you plan on confiscating somewhere north of 400 million firearms? Who is going to be kicking in doors and doing the confiscating? You?


anti: Just ban ALL sales. NO citizen needs that kind of firepower. Period. This nation is SICK with guns, and Orlando PROVES it…aGAIN.


EDIT: Then he posted this:

I will quote Larry Correia here:


“Shut up with your actual examples! Penises! PENISES! AAAAAAAHHHH!” – the liberal side of the national debate on gun control.

No wait, misread that. Hard to tell with that drivel, all looks the same and the sides that spout it are pretty interchangeable.