I thought it would be nice to revisit the Obama campaign promises, and see how he is doing after four and a half years:
1 Close Guantanamo Bay within one year. Status: Broken. It’s still open. In fact, many detainees have been cleared to go home, but Obama won’t release them.
2 Create or save 1 million jobs using $25 billion in Federal Funds. Status: Fail. This picture says it all. 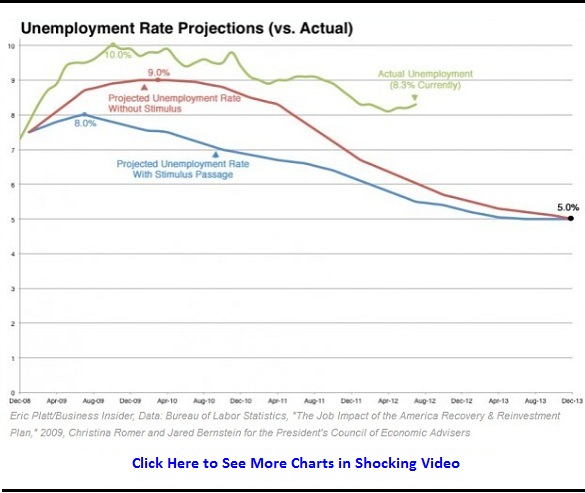 3 All troops out of Iraq within 16 months. Status: Broken. There are still 3,000 troops in Iraq. (Even though most people believe that the troops left nearly two years ago, hundreds of special forces remained, and last September, after Congress cut of funding for those troops, Obama sent troops there to “keep an eye on Syria.”
4. Create secure borders. Status: Broken. He is actually working to open the border and grant amnesty.
5. Reform government spending. FAIL. He increased the debt by $5.8 trillion during his first term. That’s more than all Presidents from Washington through Clinton, and more even than GW Bush- the guy that the Democrats slammed for excessive spending.
6. End torture: Status: Broken.
7. Require new hires to deny cronyism. Status: DO I REALLY have to point this one out?
8. Deliver weekly fireside chats online Status: Broken. He only held a few, and then only when there was something he wanted. The last one was in February and talked about gun control.
9. Toughen hate crime laws Status: Broken, also see the next one:
10. Remove discriminatory obstacles to voting. Status: a twofer with the Black Panther case
11. Lift ban on gays serving openly in the military Status: Kept. He lifted “Don’t ask, don’t tell” in 2011.
12. Penalize vote fraud. Status: Broken, but the voter fraud was all in his favor, so why should he?
13. End American dependence on foreign oil in ten years Status:
with his ban on Gulf oil drilling, I don’t see this happening. We are
more dependent on foreign oil than we were 5 years ago.
14 Ban executive employees from taking gifts from lobbyists. BROKEN.
15 But I can promise you this: I will always tell you what I think and where I stand. Need I say more?
16 Post bills online 72 hours before signing them Status: Congress doesn’t even read bills before Obama signs them
17 Increase minimum wage every year Status: Broken. Although I oppose minimum wage laws, I want to point out that minimum wage increased twice during the George W Bush Presidency, and once during the Obama administration.
18 Ensure taxes don’t go up for families with incomes lower than $250,000 Status: Broken
19 Cut taxes on the middle class Status: Broken
20 Defend Israel Status: Broken
21  Remember when he said that he was not going to push for gun control?

For you who voted for Obama- Is this what you voted for?