Reading this CNN article really boiled my blood. The author spends the first paragraph talking about how famous the people in the story are, as if that matters. The fact that they are famous is mentioned several times in the story, as if it should have given them a pass for breaking the law.

The second paragraph begins a racist diatribe, and tells you a lot about the attitude and personality of Mr White. He claims that:

Regardless of how much money or accolades I have garnered.
Regardless of my journeys across the globe. I will be forever at the
white officer’s mercy.

A couple pf paragraphs go by where he goes on about how he and his “lady” are trying to enjoy a vacation, and then he complains about being pulled over for speeding: 40 in a 25. He insists that he wasn’t and says he is going to fight the ticket.

During that same paragraph, he states they they began seeing cotton fields, and he mentions the “history of our ancestors picking cotton and being enslaved tugged at her heartstrings.” Again, with the mention of race and slavery.

According to him, there is a “driveway” that led to a cotton field, so he pulled over, using the excuse that the “oil change” light came on. He then says “we took in the history and the oppression that those little white balls created decades ago.” This supposedly brought tears to his eyes.

A cop that was driving by turned around and questioned them. Why? BECAUSE YOU WERE TRESPASSING, YOU RACIST TWIT. Trespassing is a crime, and the two of you compunded that crime by picking some of the cotton and placing it in your “lady’s” purse. That is called stealing. You didn’t get stopped because of race, you got stopped because you were committing a crime, and the fact that you are a Hollywood actor does not give you a free pass. He even took a picture of himself stealing the cotton and posted it online: 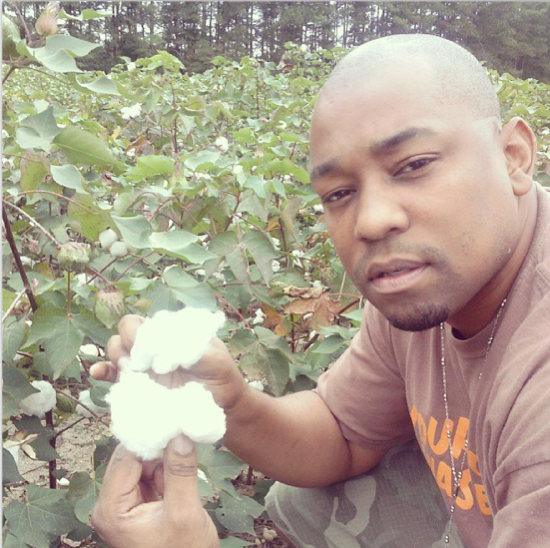 That farmer makes his livelihood from growing that cotton, and if every jerk that drove that road pulled over and took some, the farmer would soon starve.

Mr White then spends the next four paragraphs describing the interaction with the cop. At no time does he accuse the cop of making a racial statement.

Then he says, in the second to last paragraph:

I will not stop until this incident is made public and that racist
cop, Barfield, is reprimanded and punished. That was one of the worse
days of my life and I plan on making it one of his as well.

I wonder if CNN knows what libel is? If Officer Barfield should happen to read this, I would recommend that he contact an attorney about a lawsuit against Mr White, Mr Diggs, Katie the CNN producer, and CNN.