I took my new (OK, rebuilt) AR10 to the range. My goals were to get the gas block adjusted and get the ACOG dialed in for 100 yards. I got to the range, and the very next lane over contained a guy who was shooting a 300 Mag. That rifle was so loud at the indoor range, I could feel it in my sinuses. Anyway, I got the spotting scope set up, and sent the target downrange to the 25 yard mark.

I tightened screw on the gas port all the way clockwise, backed it out two full turns, loaded the rifle and squeezed the trigger. The shot was three inches left, and – no ejection. That wasn’t a problem, I didn’t expect the first round to eject. I pulled on the operating rod, and it wouldn’t budge. I tugged a few times, careful to keep the rifle pointed downrange, and I couldn’t get it to budge. I pulled both pins, and separated the lower from the upper. Then I tugged. Nothing.

At this point, the RSOs both came over and were curious. I continued to pull, and even got their permission to handle the upper a bit less like a loaded rifle. After a few minutes of tugging, the bolt eventually came free and ejected the case, but I lost sight of it. After looking around, the RSOs and I finally found it. I inspected the case- looked good. No real bulges that I could see, the primer looked OK. The bolt looked normal. So the RSOs and I looked at each other, shrugged, and I reassembled the rifle. As I reloaded it, they stepped back, filling me with confidence.

I adjusted the screw on the gas block another turn to the left, shouldered the rifle and pulled the trigger. No ejection. Cycled the bolt, and it worked fine. Another turn and another shot. Ejection, but the BCG didn’t lock open on the empty mag. Put another round in the mag, back the screw out another half turn, reload, shoot. I see the case eject, look at the ejection port, and the bolt is open. Eureka!

I adjust the scope, get a good zero, and then finally get to put a magazine through it without interruption. This is what I got at 100 yards, seated: 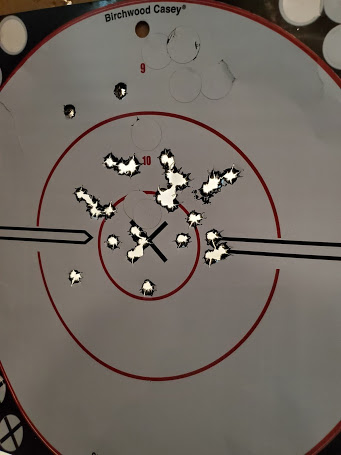 The rifle shoots great. I know the groups are loose, but those 25 rounds fell in a circle that is 5.3 inches across. 23 of those 25 rounds were within 2.5 inches of the center of that target. I am happy.

Any grit in the chamber for the 1st shot? That might contribute to a stuck case. Once cleared, the following cases would eject more freely.