During the winter in Florida, the ocean becomes unpredictable. One weekend, the waves are 1-2 feet, and two days later, they are 15 feet. Every time a cold front comes through, the ocean gets a bit bumpy. For that reason, I usually use winter as a time for getting maintenance done on my SCUBA gear, and for making upgrades.

One of this year’s upgrades is that I am becoming redundant.

SCUBA gear is life support equipment. When you are 100 feet underwater and your life support fails, life can get interesting. This is one of the reasons why divers are supposed to use the buddy system. Your buddy is your emergency backup life support. A SCUBA regulator is what reduces the (usually air) pressure from whatever is in your tank, to a pressure that is the same as the surrounding water pressure, so that you can breathe. The first stage, mounted on the tank, lowers the pressure to about 100 psi, and sends it through a hose to the second stage, located in the diver’s mouth. Many divers carry two second stage regulators, so that their buddy can use it in an emergency. This alternate is called an “octopus.”

If a regulator has a one in a thousand chance of failing, then two regulators have a one in a million chance of failing, as long as they are completely independent of each other. So I have mounted a second (smaller) tank (called a pony bottle) and regulator to my system for emergency use. That enables me to have a completely redundant life support system: The air, tanks, and regulators in my primary and backup system are completely independent of each other. That way, I don’t have to worry about contaminated air, a malfunctioning regulator, or a dive buddy that swims too far away for me to reach him in an emergency. I am my own backup. Self reliance is a good thing.

Since I am working as an underwater tour guide, I mounted the system on a quick release bracket, which enables me to hand my backup to another diver. All I have to do is pull the pins, and the tank comes free of the bracket. 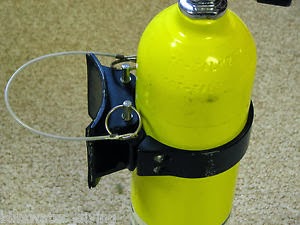 My pony bottle holds 30 cubic feet of gas. Gas consumption, due to Boyle’s law, varies with depth, but this is enough for me to breathe for about seven minutes at 100 feet of depth. In comparison, the full sized tanks I normally use hold between 80 and 120 cubic feet of gas. (I say gas, because many times, divers do not use air. I do not use air, but that is a post for another day.)