Schools are in fact dead, but teachers are a small part of it

JKB posted over at Gunfreezone about how teachers were issuing grades to a young man who wasn’t even a student. He forwards the opinion that Public Schools are dead, and teachers are phoning it in. He is partly correct, and partly wrong. He clearly misunderstood some of the issues, and instead of a long winded response, I figured that I could explain a bit of what happened.

Let’s start with the grading scale. Most school systems use automated, electronic gradebooks. In Florida, most schools use software called “Skyward.”  The New York City school system moved away from the traditional a through F grading system and awarding GPAs because COVID. Students who are not passing will receive a mark indicating that they are “progressing toward” subject mastery. It’s the same concept that is used when the parents refuse to keep score when the little snowflakes play soccer.

My school has a few requirements:

No more than 15% of my students can receive a grade below a C. If more than that number does, I have 48 hours to submit a learning plan that will detail how I will provide extra instruction and tutoring outside of my normal working hours that will improve the grades of these students. If by the next grading period the plan is unsuccessful at increasing their grades, it has a negative effect on my evaluation.

Any student who receives a grade below a C MUST have comments attached to the grade. Comments are fixed, prearranged comments that are attached by a code number. The comments are programmed by the administrators in charge of each school district. Here is an example of the ones in my district: 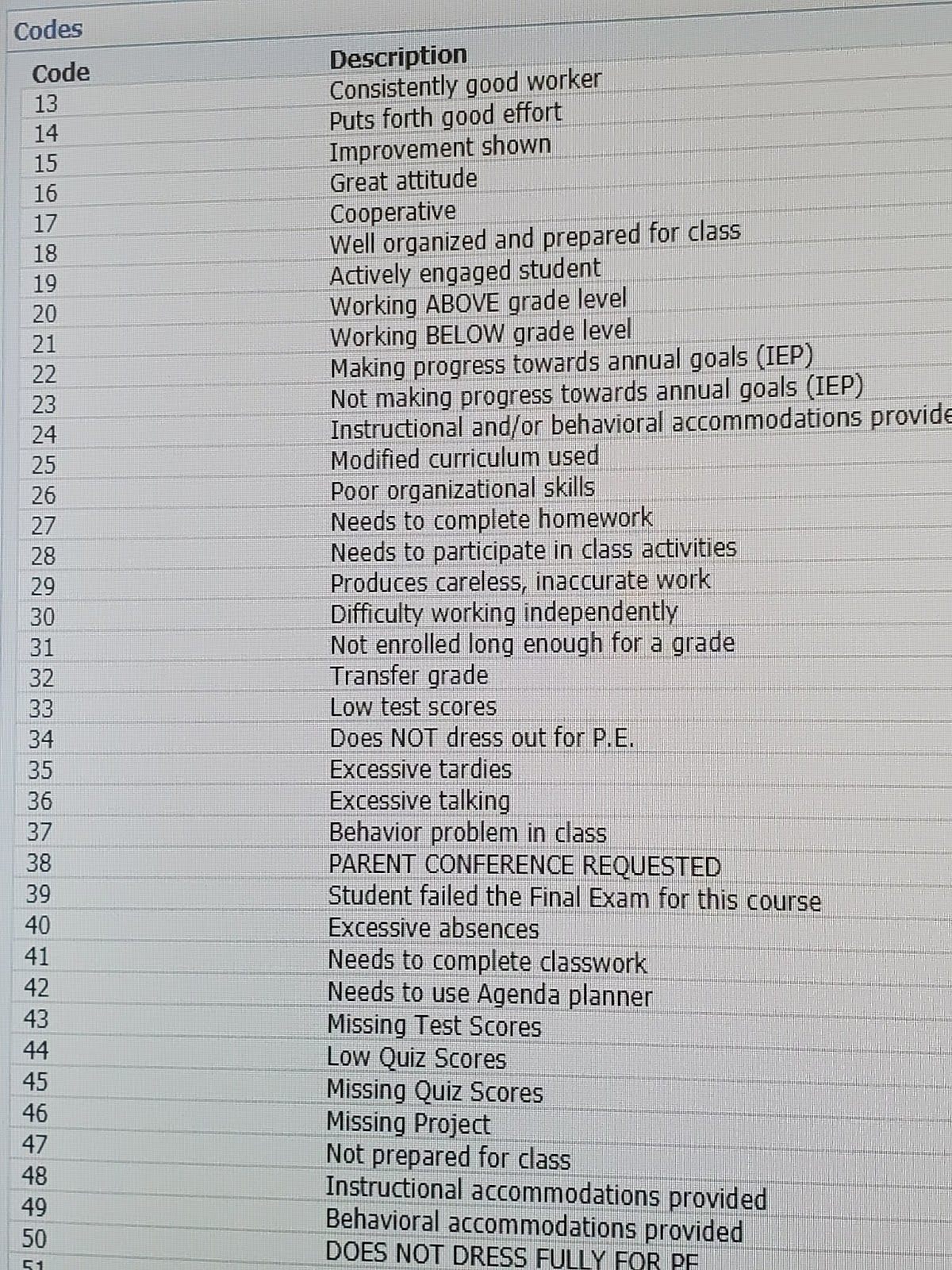 To attach a comment, the teacher merely enters a two digit code to the student’s grade, and the corresponding comment is attached to the student’s grade. Up to five such codes can be attached to each student’s record. This is the part where I take a wild assed guess. Judging by the “no failure” grading policy, I am guessing that the comments available to each teacher are things like “progressing towards content mastery” or some other nonsense that is intended to spare the student from a harsh look at reality.

So this places teachers in a tough spot. You have a student who is on your roster. They MUST be given a grade, and in more than 85% of cases, that must be a grade of a C or higher. If that student DOES get a grade lower than a C, then a comment must be placed on that grade, and it must be a grade chosen from a list.

As a teacher, you aren’t going to change the system. If you refuse, they will simply fire you before replacing you with someone who will do as they are told. So we each must decide where the line is: that invisible line where you are willing to lose your job to avoid crossing it. Avoiding putting comments on a report card isn’t it.

Is the system fucked up? It sure is. Can it be fixed? I don’t think it can.

Why does this remind me so much of police officers' complaints about they way they are instructed to work.

Sounds like teachers (and many others elsewhere) are just following instructions as the integrity of the system collapses.