Shooting at BLM march in Austin.

At the BLM march in Austin, there was a man by the name of Garrett Foster that was at the march carrying an AK clone. He was interviewed earlier in the evening by Ian Miles Cheong. You can click here to see the interview. During that interview, he made the following statement:

I think all the people who hate us and, you know, wanna say shit to us are too big of pussies to wanna stop and do anything about it.

Later that night, as the march was stopping traffic, there was a gunfight that resulted Foster’s death. The sounds of the incident were caught on a livestream of the march that can be found here (sorry, it’s Facebook), just fast forward to 1:35:43. On the video, a horn can be heard honking, there is a pause of 8 seconds, and then five shots ring out. There is another pause of about 7 seconds, then three more shots from an obviously smaller firearm.

Now that you have seen the video, here is what is being said about Foster in the press:

Mr. Foster, who had served in the military, was armed, but he was not seeking out trouble at the march, relatives and witnesses told reporters. At the time of the shooting, Mr. Foster was pushing his fiancée through an intersection in her wheelchair.

Considering the quote about counter protesters being too big of pussies to do anything, I doubt this last statement. Sounds like Foster was looking for trouble and found it. Now that doesn’t mean that the person who shot him was any less of an asshole, but we just don’t know at this point.
Police say that at least one other person besides the man who killed Foster fired shots, but are saying that Foster did not. That is all that is known at this point. I guess we will wait for more details before forming an opinion.
However, this doesn’t do anything to disprove my theory that we are in the midst of an insurgency that is in the violent stage.
__________________________________________________________________
EDITED TO ADD:
Here is a picture of Foster just before shots were fired. If you were the driver and saw this, would YOU shoot in self defense? I probably would. 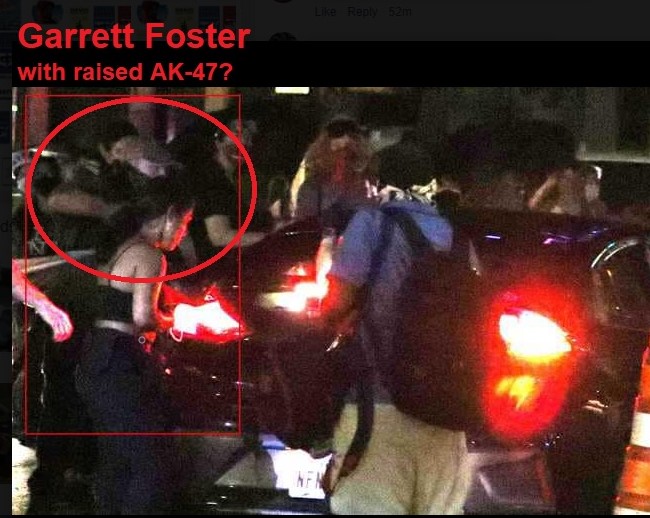 Interesting, Foster seems to be in front of the vehicle. Did the driver shoot through the windshield, or…?

In any case, I suppose among other things, this could be used as an example of the problems with open carry. (And only being partly snarky here … it does make you a potential threat and target to people who pay attention to their surroundings.)

Open carry AND joining a mob attacking a car.