I have been catching hate from people claiming to be police because I have a problem with the way that the cops handled the UPS shooting in Miami. The police turned this robbery into a double homicide:

Watch this video of cops taking cover behind an SUV with a woman and kids in it. She tries to get out of the line of fire, and the cops stay with the vehicle, using that family as meat shields to protect their cowardly asses:

The second was in using citizens as a backstop as 18 of them fired more than 200 rounds downrange without regard for where those bullets were landing: 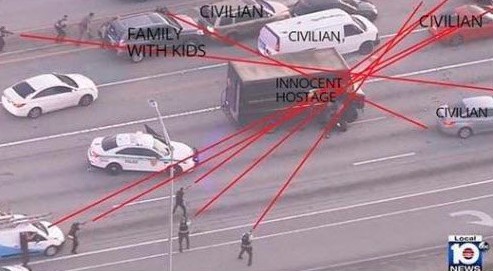 I have a dream. It’s not a big dream, it’s just a little dream. My dream – and I hope you don’t find this too crazy – is that I would like the people of this community to feel that if, God forbid, there were a crime taking place, calling the police department would actually be a wise thing to do. You can’t have people, if their family is being raped, robbed, or murdered, saying, “Whatever you do, don’t call the police department!” That would be bad.

In this case, while I agree that the criminals needed to be apprehended, the tactics that the police used resulted in two people being killed. That, in my opinion, is more of a tragedy than allowing the criminals to escape with the loot.

Don’t sit there and tell me that I can’t judge this unless I have been a cop. Any moron knows that real men don’t hide behind women and kids in order to save their own candy asses. Or is my toxic masculinity too much for today’s police departments?