If you all remember, I wrote about Grandmaster J and his band of insurgents, the “Not F*cking Around Coalition” (NFAC) over the summer. They were showing up in cities around the southeast and intimidating people by brandishing firearms.

It seems that, now that the election is over, he and his band of useful idiots have reached the limit of their usefulness. He has been arrested and charged for interfering and threatening Federal law enforcement when he pointed a weapon mounted light at them in September. So it took them three months to figure this out? Of course it didn’t. They needed him around to make headlines and stoke fear, and now they don’t.

You will note that BLM is quiet. The street violence is over. One phase ends, the next begins.

Grandmaster Jay of the NFAC never disappoints. First, he stole the insurgency. Then he showed us how good his marksmanship is. Then he does it again.

Then his so-called military trained militia shot some of its own members.

Then he produced a video showing us how an AR fires if you drop it. The Internet responded accordingly.

Now he doubles down. This is comedy gold. 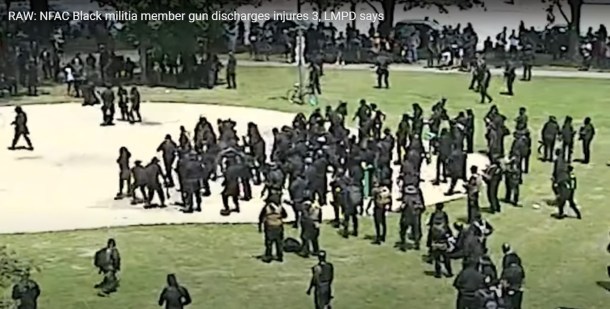 We could have used him

Range day with an insurgent

Remember Grandmaster J of the NFAC (Not Fucking Around Coalition), the guy who said he was going to take over Texas? He claimed that he and the other senior members of his group of insurgents had all received military training and were experts on the rifle range? He decided to put his latest range day up on Youtube.

A bench rested shot on a pistol target from 10 and then 25 yards with an AR-15, and THAT is the best he can do? He is certainly no expert. His gun handling skills would get him thrown out of my range. He has no muzzle control and is certainly not in any position to be teaching this to others. 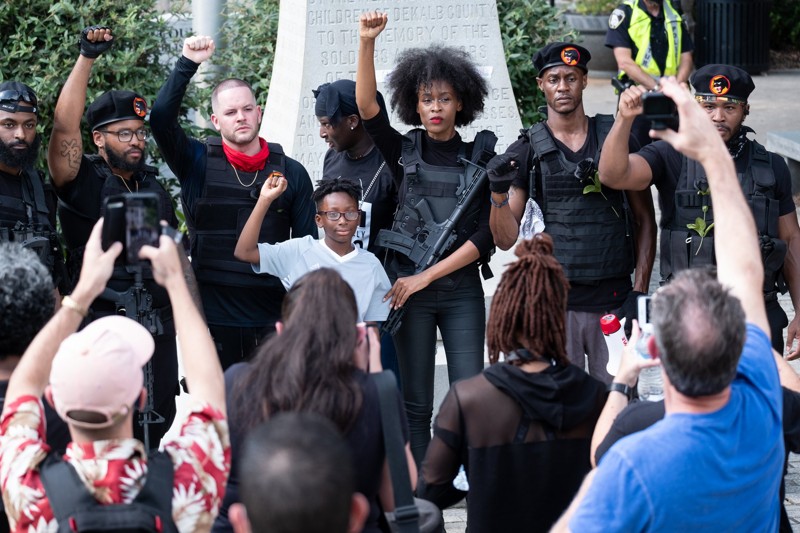 I know I have written about the NFAC and other insurgents. They are a clear danger to the American public. They also have posers out there who are stealing the look in order to gain more press and “legitimacy” for their cause. Take these guys:

Take a look at the 7 people dressed in black in the above picture. They are all wearing “rigs” that appear to be some sort of military appearing rigs for carrying weapons and associated equipment. Look closer. The ones that the men are wearing obviously do not have any armor panels in them. They are shells only. The woman is wearing a chest plate designed for baseball catchers. The man on the right has a shell that is covered with magazine pouches, but they are all empty.

Look at the three who are wearing berets. The patch they have is from the 66th Infantry Division, not the New Black Panther Party.

There is a closeup of the woman and her rifle. 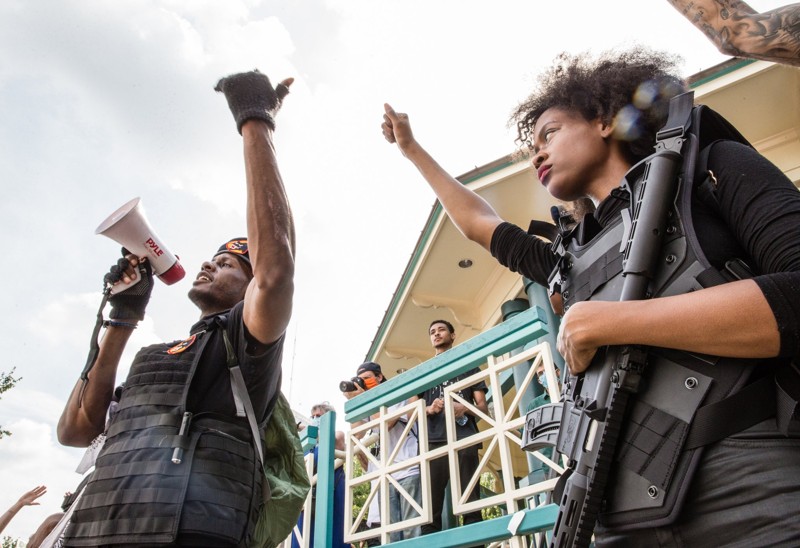 If you zoom in, you can clearly see three things: There is an M&P logo clearly visible on the mag well, the ejection port is clearly too short to be anything but a .22 (making the rifle a Smith and Wesson M&P15-22 Sport). This leads one to also notice that the magazine is empty. Also note that the sling swivel is empty (indicating that she is clutching it because there is no sling) and the rifle only has the fold down BUIS that ship with the rifle, and they are folded down.

You can also see the man next to her is wearing a completely empty ballistic vest cover.

So I did some checking. It turns out that the white guy in the picture up top is a guy by the name of Michael Pierino. He is an Atlanta area professional actor. Here is his IMDB page. He is mostly a bit actor from things like “The Walking Dead.”

Also from IMDB, here is a cast picture from a short he was just in called “Protectors of Life” 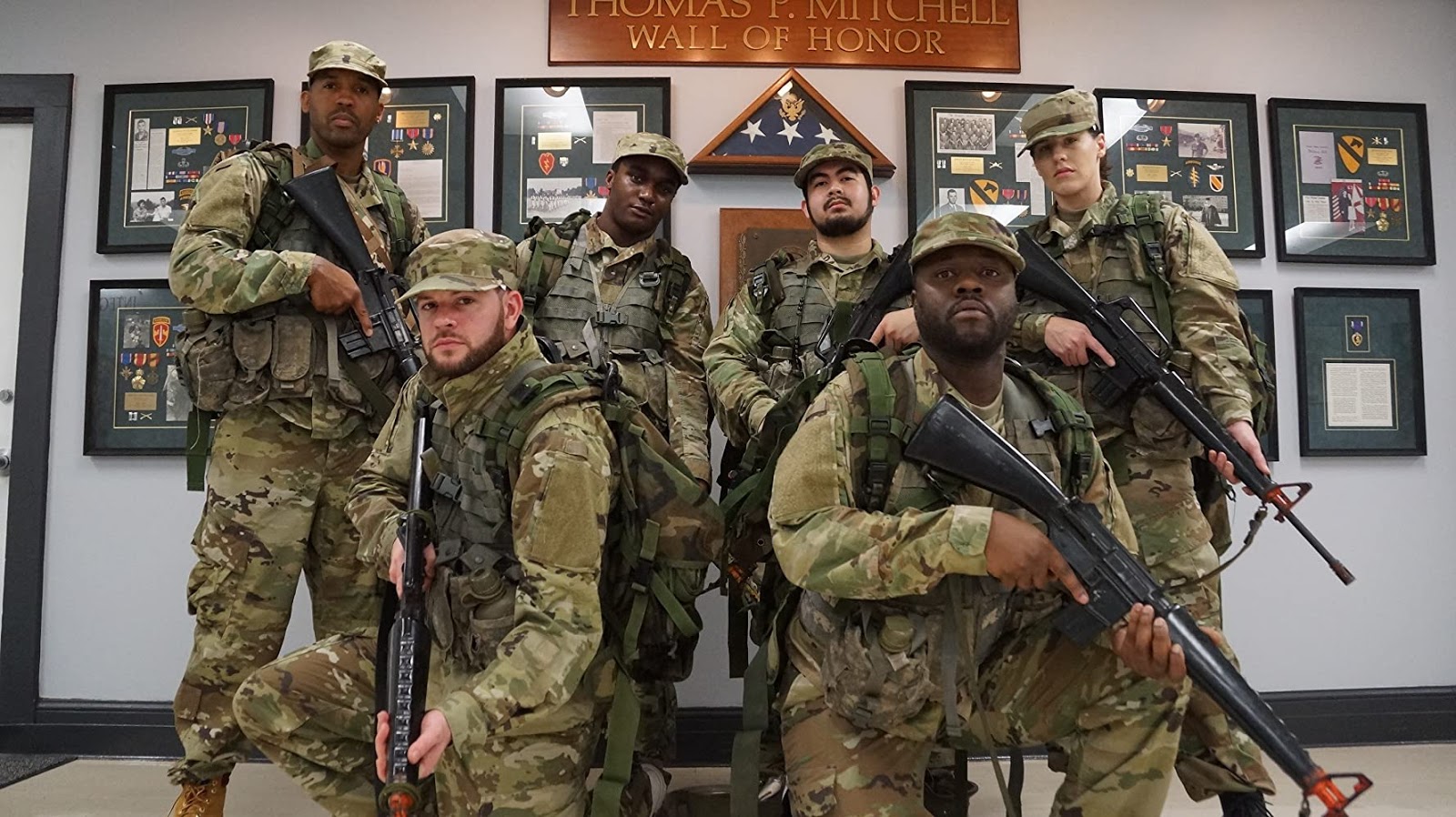 Some more searching discovers that the people in the top photo are ALL actors. They claim to be “for real” and are not being paid to act. If this is true, they are in REAL danger. Carrying unloaded firearms and empty plate carriers while trying to provoke a civil war is just asking to get owned in a gunfight.

The attorney who is representing them- Alann Pugh. He also appears to be posting to Instagram as SpiikeG.