TEA party is politics as usual

Proving again that there is no difference between the Democrats and Republicans, the darling of the TEA party movement and Governor of Wisconsin, Scott Walker. What did he do? Well, he made all of these pretty speeches about how public employee unions were the enemy.

Then he went and gave the son of one of his contributors an $81,500 a year job. The boy’s qualifications?

Just in his mid-20s, Brian Deschane has no college degree, very little management experience and two drunken-driving convictions, yet he has landed an $81,500-per-year job in Gov. Scott Walker’s administration overseeing environmental and regulatory matters and dozens of employees at the Department of Commerce. Even though Walker says the state is broke and public employees are overpaid, Deschane already has earned a promotion and a 26% pay raise in just two months with the state. 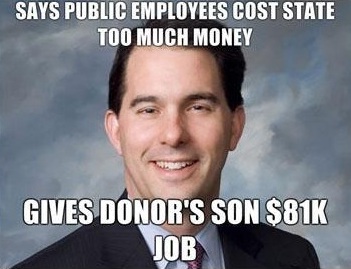 How did Deschane score his plum assignment with the Walker team? It wasn’t due to his qualifications. According to his resumé, Deschane, 27, attended the University of Wisconsin-Madison for two years, worked for two Republican lawmakers – then-Sens. David Zien and Cathy Stepp, now the natural resources secretary – and helped run a legislative and a losing congressional campaign. He held part-time posts with the Wisconsin Builders Association and the Wisconsin Business Council until being named to his first state gig earlier this year.

His father is Jerry Deschane, executive vice president and longtime lobbyist for the Madison-based Wisconsin Builders Association, which bet big on Walker during last year’s governor’s race. The group’s political action committee gave $29,000 to Walker and his running mate, Lt. Gov. Rebecca Kleefisch, last year, making it one of the top five PAC donors to the governor’s successful campaign. Even more impressive, members of the trade group funneled more than $92,000 through its conduit to Walker’s campaign over the past two years. Total donations: $121,652.

That TEA party sure is reining in that abusive government spending.

Politics as usual. The only answer is to take the power away from government.