The crowds demanding that the police be defunded are not COMPLETELY wrong. That is what makes these protests so effective and why they resonate with so many people. This sign actually makes a good point: 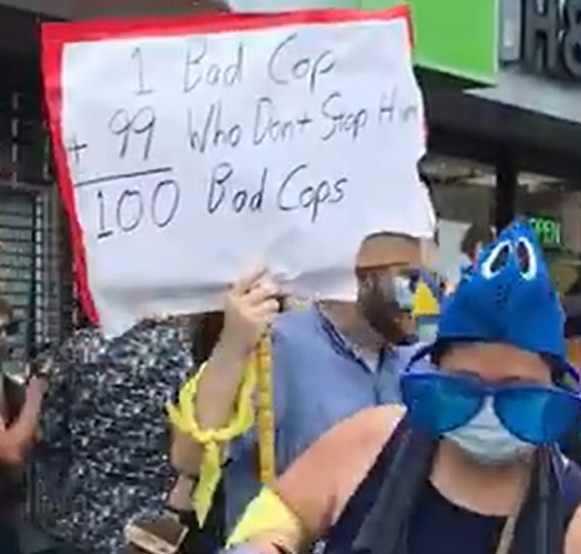 Most cops are good and do their best. With that being said, if a cop knows that other cops are doing stuff like threatening to frame people for crimes that they didn’t commit, taking cover behind women and children during a gunfight, or other illegal or immoral acts, yet doesn’t speak up (or worse actively covers for them) then they are not good cops either. A cop is found DUI, and police deliberately screw up the arrest so that the drunk cop gets away with it. The cops who did that are bad cops.

Then there is Officer Harless and the city that supported him when he threatened to kill two people who were legally carrying concealed weapons.

Or how about the cops who provide their own probable cause to conduct a search by calling the police tip line from their own cell phone?

Police: You need to clean up your ranks. Speak up. Stop defending the bad cops. Clean your own house. The nation depends on it.

They're not entirely wrong in theory, but that's not saying much.

The statement is that 99 other cops know that the one is bad and therefore they're all bad. How many police departments have a hundred cops? In any department, chances are that only a handful of people who work with the guy day in and day out will know they're bad. It's probably more like 1 bad cop and 1 guy who rides with him every shift. Which isn't to say that 50% of cops are bad.

To complicate things, what if the guy did one of those corrupt tricks once?

So yeah, there's some percentage of cops who are bad, including the guy who sees his partner do something wrong and doesn't mention it. We don't know how many, and it's sloppy thinking to say they're all bad without more evidence than we've got.

You've been saying what I've been thinking for a long time. Completely agree.

SiGraybeard, cops should know who's crooked and who ain't, even if they don't work together. People talk. I work in manufacturing, several thousand employees on my site. I don't know even half of them, but in conversation someone will mention a name and everyone will nod knowingly and mutter. There's a gossip on every shift, and there's a code between hourly and management. The difference is that no one outside the factory floor is involved. With cops, the entire public is involved and we should demand better. So yes, the "good cops" know who the "bad cops" are.

His Pronoun is “Ruff”

Florida man arrested for public sex with a dog.