This happened to me 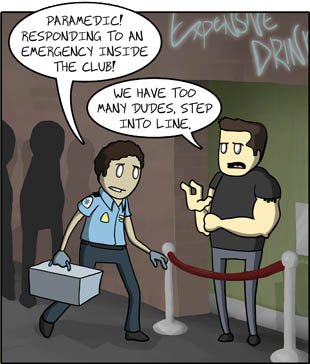 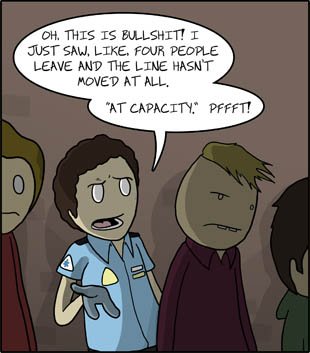 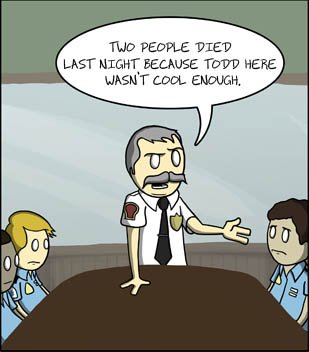 I know the cartoon is funny, but something similar happened to me about five years ago. We were dispatched to a reported drug overdose at one of our local Hispanic night clubs. (For those who are unaware, more than 45% of the local population speaks Spanish as a primary language. There is no shortage of Spanish dance clubs around Central Florida.) A young lady had called 911 to report that she and her friend were in the restroom of the club, and her friend had overdosed on an unknown drug. When we arrived on scene in the rig with all of the emergency lights flashing, I got out and went to enter the club.

The bouncer at the door told me that I had to pay the cover charge in order to enter. Thinking that he was kidding, I laughed. He blocked the door. Pointing to my uniform, I told him that I was there on official business and brushed past him. No sooner did I enter the restroom, when I was jumped by four bouncers who carried me out through the club, with the patrons of the club shouting at me, “Get out Gringo,” and yelling Spanish obscenities. The bouncers threw me out the door, and told me that whites were not allowed inside.

I called for Police backup, and got no fewer than 15 Deputies. We wound up treating our patient, and the Manager (and his bouncers) got a lecture from the cops. No arrests were made.

It's a whole different world down there, I guess. We get calls to clubs all the time and there are always cops in presence. All bars are "licensed premises" and subject to inspection by the police at any time. I've never had the staff be anything but cooperative, well except for once. They had tossed an underage girl from the bar THEN called the ambulance in a vain attempt to pretend that they had found her in the parking lot. The manager and bouncers started to give us lip when we asked what happened. That stopped when I called for a police sergeant to come to the scene. Attitude adjustment ensued.