I had a female friend of mine (who is a LEO) post the following picture on Facebook: 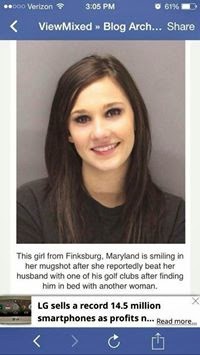 I replied with “Domestic Violence is always wrong.” Her answer? “Spoken like a typical man. You all want to cheat and get away with it.”

Being that I have been falsely accused by women of domestic violence twice in the past, I am sensitive to this. The first time was in 2004. The reason that I was accused was that the woman was angry that when we broke up, I stopped paying for the cell phone service that I had been providing. The judge agreed, and said that this was a form of “financial violence,” in that I was using the fact that I had money, and she did not, to control her. The problem with that bit of judicial activism is that Florida has a pretty specific definition of what constitutes domestic violence, and that ain’t it. The decision was overturned on appeal. It cost me a LOT of money to make that go away.

It disturbs me that a POLICE OFFICER will support a woman beating up her husband because he cheated on her, while the same legal system supports wasting people’s time and ruining the lives of men who have done nothing, because a woman is angry that she got caught stealing.

I’m guessing that any man who beats up his wife for cheating will not get the same cheerleaders.