So Pilot came to get the damaged safe from yesterday’s post. Let me start by letting all of you know just how large of a safe we are talking about. It is 60 inches tall, 42 wide, and 25 deep. It weighs 860 pounds while mounted on the transport skids. With the size of this safe in mind, I was quite surprised when Pilot freight showed up with a trailer that was 4 feet tall and 6 feet long and looked a lot like this one: 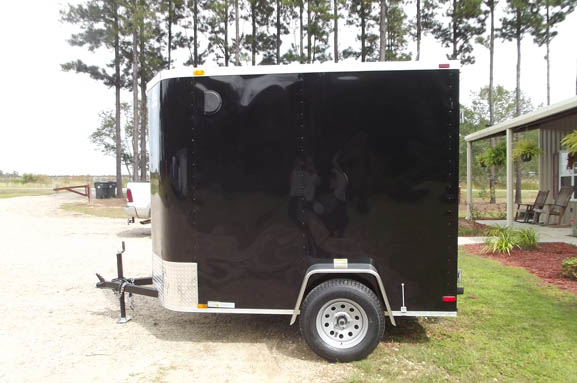 It was being towed by an F150. The pickup crew was a pair of men in their 30’s and a teenage boy. They originally delivered this thing in a truck with a hydraulic liftgate and used a pallet jack.
The only equipment they had for moving it was an appliance dolly like this one. Note that the safe weights 100 pounds more than the dolly is rated to carry. Not only that, but the nose plate of the dolly wasn’t long enough to lift the safe, so two of this team of rocket surgeons tips the safe over while the third member of the team stood under the tipping safe holding the dolly, so he could catch the safe with it as it tipped over. It made me nervous just watching them.
So then they wheel this thing down my driveway, with all three of them on the downhill side of the load. I could just picture this thing getting away from them and running one of them over. Once they arrived at the back end of the trailer, they tipped the safe over until the dolly was lying on the floor, and then lifted the bottom of the safe and slid it in.
I can only imagine how many on the job injuries these guys have, and they probably have no idea why. The good news is that the safe is out of here, I didn’t have to call 911 for the paramedics to come rescue a Pilot employee trapped under a safe like Wyle E. Coyote, and Amazon already processed the refund to my credit card.
People who have read this post: 212
Categories: Uncategorized

Sounds like a great time to be far away from the scene, else you'll end up as a witness for either the plaintiff or the defense.

Did you hear banjo music or Yackity-Sax playing in the background?