Sheriff Grady Judd, the Sheriff of Polk County, Florida, has posted the following picture on the county sheriff’s webpage: 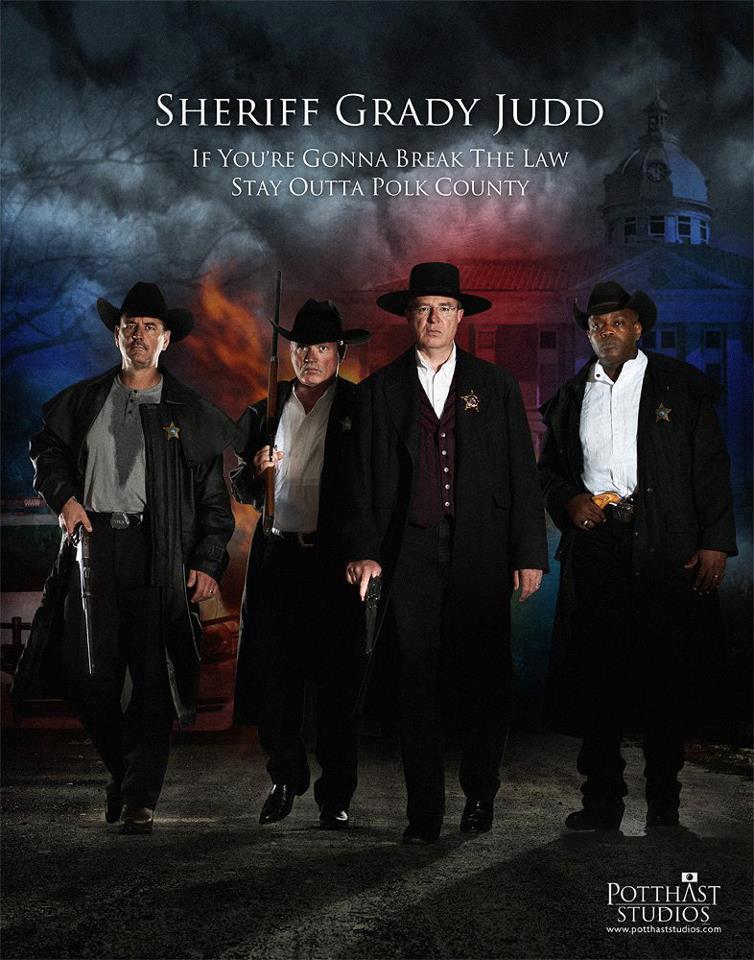 Is this how he sees himself? Some sort of gunslinging wild west cowboy? Is hiring a professional photographer to take such a self promoting picture at taxpayer expense a good use of taxpayer funds? Or is this picture being used to help a certain Sheriff’s reelection campaign?

Sheriff Judd is a lawbreaker himself. Maybe this poster means that he doesn’t want the competition. After all, there was a deputy that was killed several years ago, and when Judd’s deputies caught up to the alleged shooter, they fired at him 110 times, hitting him 68 times. When asked why they shot him 68 times, the sheriff responded with “That was all the bullets we had, or we would have shot him more!”

He also has previously engaged in arresting people who are critical of his policies, including arresting one woman for “lewd activity in the presence of a minor” because her neighbor and his child heard a “sexual sounding noise” coming from the woman’s home 48 days earlier. Of course, it was only a coincidence that the woman had been critical of the sheriff and his policies. The charges were dropped, but the woman had to agree to stop criticizing the sheriff.

There was also the case of Christopher Michael Wilson, who ran a website that allowed people to post nude pictures of women on the site, and it required a credit card to access, so that the Wilson would know that people accessing the site were adults. Military men complained that they could not do so while in Saudi Arabia and Iraq, because the web servers in those countries blocked credit cards from being processed by companies who promoted pornography. Because of this, Wilson allowed members who posted pictures from the war zone to have access to the site. The site became a photo journal that chronicled the Iraq war. It was one of the first sites to publish the Abu Grhaib pictures that so embarrassed former President Bush.

Judd arrested Wilson on 301 counts of distributing pornography, even though Wilson did not post the pictures, he merely ran a site where people posted content, and the servers were not in Polk County (they were in the Netherlands). A plea deal was reached where Wilson had to turn the website over to Judd.

Don’t forget that Grady Judd is also one of the Sheriffs who broke the law last year when they lobbied the state legislators to defeat the open carry law.

There should be a caption on the bottom of that poster that says “unless you are Sheriff Grady, or one of his “only ones.”

I didn't know much about the Florida "justice" system before moving down here a year ago. Since then someone was arrested for taping a cop one town over, and the cops beat a man in custody to death in the other border town. Pretty impressive!

I can understand people wanting to be tough on crime, but these people are petty tyrants and criminals.