When we want to measure auto accident fatalities, the metric of fatalities per 100 million miles driven is the one that statisticians use. This formula eliminates the chance that short-term anomalies — such as a
rash of multi-vehicle or multi-passenger accidents in a certain state
— will cause fluctuations in the rate that are not related to the true
cause of the accident or accidents. The fatality rate for the last 90 years in the US looks like this:

Converting these numbers into a graph, gives you the following: 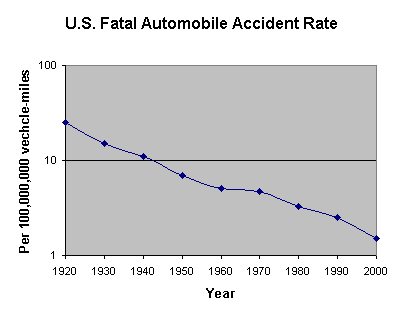 Looking at these facts, I can draw a few conclusions: The creation of drunk driving laws and the lowering of the intoxication level to .08% did nothing to reduce the fatality rate. Even more remarkable is that lowering the national speed limit to 55 miles per hour in 1973, and the subsequent raising of the speed limit to 70 miles per hour also had no effect on the fatality rate.

Now we are being duped by calls for saving lives again, when the true goal is control of our lives.

There are many on the more control side of the gun debate that like to point out that Canada has a lower murder rate, and claim that the difference is due to the strict gun laws of our northern neighbors. Comparing the US crime rates to Canada is an apples and oranges
comparison.

I believe that this indicates that we have a problem with culture in  our large cities more than it indicates a gun problem, being that our suburban and rural communities have a higher rate of firearms ownership than
do the cities. At any rate, the scientific method dictates that in
examining and comparing different data sets, one must eliminate all
variables, except the one that is being compared. For that reason, a
straight comparison of the US murder rate and the murder rate of any
other country is not a valid comparison.

A 7 year old girl is brought into the emergency room, having an asthma attack. The staff of the emergency department gives her three updraft treatments of albuterol and atrovent, and 125mg of Solumedrol. Since she is still complaining that she cannot breathe, the staff calls for a Critical Care ambulance to transport her to the children’s hospital for further treatment.
Upon arrival, the critical care paramedic sees a child who is obviously tiring of her respiratory effort, and her vitals show it: Her SaO2 is 86% on 2 liters by cannula, Heart Rate is 152, BP is 102/64. Her EtCO2 (which the hospital emergency department does not have the equipment to measure) shows a waveform that is too flat to determine is the classic “sharkfin” is present or not, and has a level of 16mmHg.
The hospital is busy debating on whether to give her another albuterol and atrovent treatment, epiniephrine, or intubating her. The paramedic asks why they have not given her a smooth muscle relaxer like magnesium sulfate, and the nurse replies that the doctor was worried that it might lower the patient’s blood pressure. Of course, he was perfectly willing to give a beta agonist like albuterol to a patient who wasn’t exchanging enough air for it to work, and risk sending the already tachycardic patient’s heart rate even higher. Epinephrine would also increase the tachycardia.

The scenario illustrates some big flaws in how hospitals treat respiratory problems:

– Hospital emergency rooms, for the most part, do not monitor capnography, even though it is the most effective way of measuring pulmonary gas exchange on a realtime basis.
– Doctors not being the all knowing, perfect beings that the medical profession would have us treat them like
– The doctor not realizing that intubation is NOT therapeutic to asthmatics. This is a small airway problem, and will not be resolved by putting a tube in the trachea.

In this scenario, the paramedic called medical control and requested and received orders for 25mg of magnesium sulfate over ten minutes. By the end of that ten minute period, her blood pressure was still 100/58, her heart rate was down to 122, SaO2 100%, and her capnograph showed a square wave at 38mmHg. Her lung sounds were clear, and she was breathing normally.

To everyone: We should be the masters of basic medical problems. Epi and albuterol are not magic fixes for everything respiratory.
To doctors: Medics occasionally know what they are doing

In a followup to last week’s post about the traffic camera ticket that was written to the stationary automobile, I found another article: Over 2,000 traffic tickets were sent out from a traffic camera, even though the officer who “reviewed” and signed the citations had been dead for months.

So much for the review system. Reminds me of the Robosigning scandal.

The recent shooting in CT has brought them out of the woodwork. The anti-gunners. They smell blood, and they think that this is their moment. As one of my anti-gun friends put it, the shooting in CT is the best thing that could have happened for the gun control movement. They are reveling in the deaths of those children.

I made the statement that gun owners are as responsible for the CT shooting as gays are for what happened at Penn State, and I was informed by a former coworker that no one at Penn State died, and that guns kill people, and if they were illegal, we would save many lives. No matter what I said, the talking points kept coming, and no amount of discussion would allow a point to be conceded. I walked away. There is no changing the mind of the zealot. The ironic part is that this guy has such an anger problem that he was once suspended at work and not allowed to return until he completed an anger management course.

Not all of the people who are currently calling for gun restrictions are beyond reason. I asked one woman who was demanding gun laws:

Suppose
it was shown that the reporting of violent crime has a causal effect on
copycat murders. Would you support a law that would make it illegal for
the press to report violent crime? If not, why not?

She conceded that it is a bad idea to restrict rights, but then said that

Of
course not. But I see your point and I’m not saying that taking away
your 2nd amendment right is the solution. You have a right to bear arms
as do I. I just don’t believe that adding additional guns to an already
violent and self-absorbed society is
the solution. I don’t know if anything can be done at this point to
change things. The lack of self-control, misguided anger, obsession with
violence whether in music or film is destroying this country.

I asked how a gun law would change a nationwide obsession with violence. She did not reply.

For that reason, I have decided to only speak to people who are willing to have an actual discussion, and not simply an argument where they scream about how inanimate objects are evil, how I am a wannabe killer, or any other such nonsense. I will simply accept that those people wish to deprive me of my rights, and remove them from my life. I will no longer be friends with anyone that wants to restrict my rights based upon the actions of another person.

Although not a hard core anti-gunner, I have a friend who is a hard core Democrat. This is what she had to tell me on Facebook about new gun laws in the wake of the Connecticut shooting:

you
know they have to do something, public outcry and all. and restricting
guns is the easiest thing to address. i’m sure you’ll get to keep most
if not all of your arsenal. and soon there will be another
shooting/bombing/mass casualty event and they’ll
realize (hopefully) they were going at it the wrong way. i’m not sure
what the answer is. things like this are just always going to happen.
you can’t control all the factors in events like that.

This is the mental disconnect: They are aware that gun laws will not work, but will vote to remove your rights any way. Since gun ownership isn’t important to them, they will gladly throw your rights under the bus.

Shieffer at CBS news says that this shooting may be what gets an assault weapons ban passed.

A hostette at MSNBC, Alex Wagner, said, “Hopefully, this shooting will
result in political capital to reform gun laws. It is hopefully — and
we say this every single time we cover one of these things. There’s
gotta be some kind of measurable change, some kind of reaction. One
would hope there would be some political capital to reform the way in
which we handle gun and gun violence in this country.”

The Obama White House lost no time in releasing a statement calling for an assault weapons ban.

Dancing in the blood of the victims.

So a post over at Tam’s place got me thinking. Specifically, the link to the cameras and microphones on buses, and the link that Tam placed in the comments about what the Feds can get without a warrant. There is even scarier technology than that. For example, there is this software that allows a person to listen in on calls, and even activate “environmental listening” where the phone is used as a “bug” that allows a person to remotely activate your cell phone’s microphone in order to listen in on whatever is happening in the room- all without the knowledge of the cell phone’s owner.

You would be foolish indeed if you believed that the police have not been exploiting this capability. The government doesn’t need to bug your house, you are doing it for them.

A speed camera issues a ticket to a stationary car. The real story here isn’t that one car was erroneously ticketed. No, the real story is the fact that Baltimore’s 164 cameras have issued $48 million in tickets over the last three years. If the amount of the ticket, $40, is typical, this means that 400,000 tickets a year are issued by those 164 cameras: roughly 2400 tickets for each camera.

The officers that review the pictures before they are issued review and issue 1200 tickets per day. On an 8 hour workday, that leaves just 24 seconds for each picture to be reviewed and a citation issued. In other words, this is nothing but a revenue generator with few safeguards or oversight.