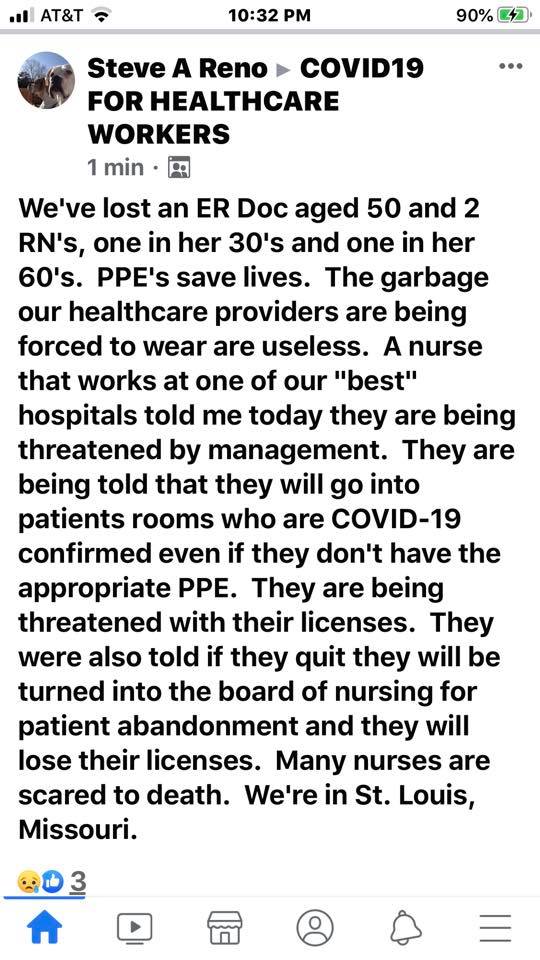 Combined with the fact that NYPD officers are calling in sick in large numbers, and you see the picture.

The US spends $2.6 billion a year trying to find a cure for AIDS and the virus that causes it: HIV. The disease is still endemic to (mostly) the gay population.

The US just shut down the entire nation, and just allocated more than $2 trillion to fight the Wuhan virus. That effort isn’t working either. Why not?

The same reason: you can’t get people to stop the risky behaviors that allow the virus to proliferate.

I don’t really watch TV, but my wife does. One of the things that the quarantine has done is caused me to watch a few of the shows that pass for television nowadays. The shows are the most obvious, Orwellian pieces of propaganda you can imagine.

Every protagonist male is gay.
Half of the protagonist females are gay. The other half all claim to be victims of rape or discrimination.
Every important person (surgeon, CEO, important political figure) is a minority.
The villains are always white males that are portrayed as abusive, rapist, racist misogynists.
Every show has at least one black character who was pulled over by the cops because he was black.

The propaganda is extremely heavy handed.

By measuring people’s movement using cell phone data, companies can tell whether or not people are staying home. What is interesting here is that the counties in Florida that are staying home are also the ones with the highest number of infections. This seems to support my theory that the quarantine isn’t working. I would love to see a statistical analysis of the data to see if there is a correlation between illness rates and travel. 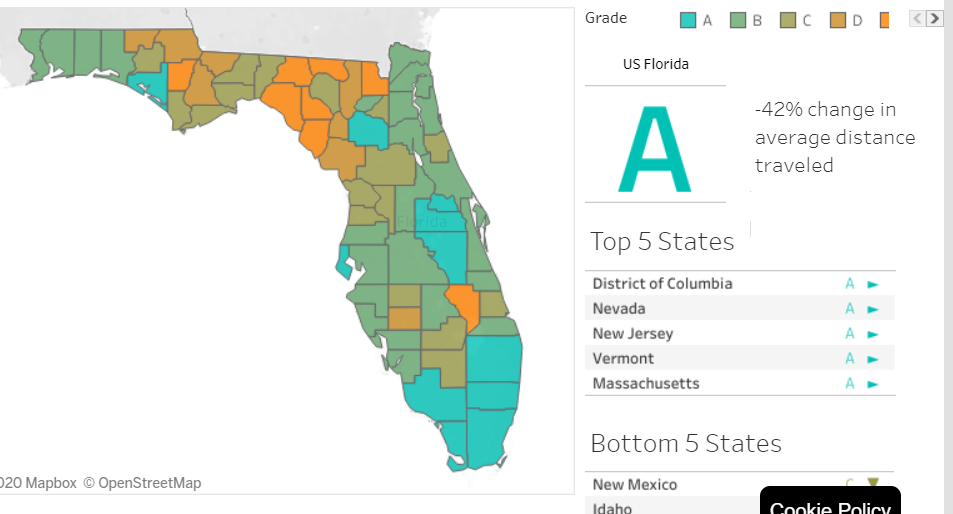 Forgive my poor photoshop skills, but look at the map of Wuhan virus cases on the left, and compare them to the election results on the right. Remarkably similar, eh? I wonder what that means. 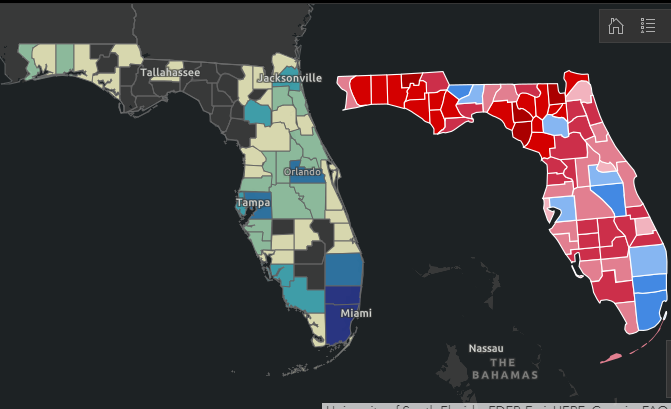 There are many loopholes in the law. Uber drivers, notaries, and many other people are exempt.

I want to post an open letter from the Saint Cloud, Florida firefighters’ union. The way that rescue professionals are being treated in this pandemic is a shame.

On behalf of St. Cloud Professional firefighters Local 4153 we would like to thank all the citizens of Osceola County and especially the residents of St. Cloud for supporting your fire and Police department during this current, stressful and challenging time. We all also want to thank everyone who is trying to do their part in keeping exposures to a minimum as this helps us get through this in a timely manner.
We are also writing this post to inform you of some challenges that we are facing in the midst of this pandemic.
As firefighters, paramedics and law enforcement officers we accept the hazards that come with our job and understand and accept the fact that we chose to enter a career which will inevitably put us in harms way in order to help those whom we have taken an oath to serve. But recently, one of our own firefighters became ill while performing his duties serving the citizens, was sent home as per our infectious control protocols and as such cannot return to work until he’s given a clean bill of health.
As of this moment our firefighter is being forced to use his own sick time, not covered by the city meanwhile the current policy states that if we become sick we must have no symptoms before returning to duty. He has also been unsuccessful in attempting to get tested for COVID19 as these procedures are being rolled out in real time.
Currently, the city manager has sent all administrative, non essential personnel, home on paid administrative leave. But it is our position that if we become ill or exposed during the performance of our duties we should be covered under paid administrative leave and/or workman’s comp which, of this posting, the city’s position is that becoming sick on duty, during a pandemic, is not covered under workman’s comp.
In conclusion, we reiterate that we understand and accept our roles and responsibilities as first responders, and stand in solidarity with residents of our great cities and county as we navigate these stormy pandemic waters. As prudent and conscientious citizens, understanding our choice of career, we would not expect the city to cover us if we become sick off duty. We are only asking that the city do what is right as we continue to protect and serve the community.

The city’s bureaucrats are at home with full pay whether sick or not, but the responders who are forced to treat the sick and wind up catching the disease are not permitted to work and must use their own sick leave. Disgusting.

Let me start by saying that I am not a stockbroker or any other kind of financial expert, I am just a guy who is looking for a way for my savings to make more than what my savings accounts are paying. With that being said, I see in this economy a once in a lifetime opportunity to make money.

The stock market has lost billions or perhaps even trillions in value this month, all because of a situation that is temporary: a government shutdown caused by a virus. The President says that he wants to lift that shutdown within the next three weeks. Once that happens, many of the stocks that have taken a huge hit will rebound in a big way. Since stocks need to be held for a year in order to pay the long term capital gains tax rates, this timeline works to my advantage.

Last Tuesday, I bought $7500 worth of stock in restaurants and cruise lines. The particular stocks that I grabbed were ones that had good numbers and were healthy companies up until the end of February. Since then, each of these companies had seen their stock price drop by more than 50%. In one case, this company lost 65% of its price.

Since this price drop is not due to anything that the company has done, nor is it due to any ssytemic problem, there is no reason why the stock shouldn’t increase to its previous price within a year of the government imposed shutdown being lifted. Here we are, eight days later, and that initial $7500 investment is now worth $12,000. After discussing it with the Mrs, we are going to buy another $15,000 in stock. I don’t think that the market is going to go any lower, and I also think that the odds are good that we will see a doubling of these stocks within a year’s time.

If I could afford more, I would do it.

Congress just decided to cure the Wuhan virus by spraying money at it with a government fire hose. They approved $2 trillion in funding for “relief” from the government mandated shutdown. They are already talking about doing it again next month. 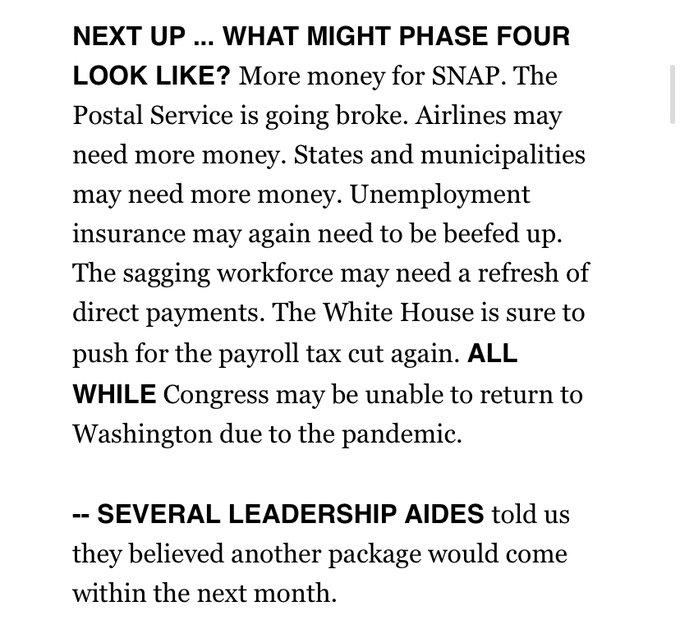 Our national debt is already $23.5 Trillion. So, this one package will increase the debt to almost $26 trillion, and they are already talking about doing it again.

It isn’t working. We have ordered every bar and business to be closed with the intention that we stop the human interaction that makes transmission of the Wuhan virus possible. People are interacting anyway.  Anecdotal example:

My in-laws are members of a drinking club. You know the ones- clubs like the Moose Lodge, VFW, American Legion, etc. that are all established to allow people to congregate and imbibe in inexpensive booze. Now this particular club has a liquor license and has been shut down by order of the governor, so they followed the order and stopped selling booze. So far, so good, right?

Not so fast. There is a core of members who are still going every day to do “maintenance” on the building, which is allowed under the order. While they are working, they are helping themselves to the booze from the bar, and spending all day there, drinking and “working” on the building. They have been doing so for the past two weeks. When my wife told them that they should stay home, their reply was “No one here is sick. We are all fine, so I don’t think it’s a problem. We’ve been doing this for two weeks, and no one has gotten sick yet.”

More than anything, this is why I don’t think that shutting down all of the businesses can work. I have said all along that this is not going to work– because the only answer is to stop all interaction between the infected and the uninfected. Since there is no way to know which is which until it is too late, because once you are showing symptoms, you have been contagious for days.

The proposed answers to the shutdown are to throw money at it. Why not just declare this war lost, and let the disease run its course? If we do not, we still lose the war against the virus, and then we destroy our economy as well.