Recently, I posted about the 18 year old woman that is being charged with Lewd and Lascivious behavior for having sexual relations with an underaged girl. This week, the Washington Post ran an editorial that takes the position that we should revisit that law. The Conservatives are up in arms about it, but I think it is valid that we take a look at laws periodically, to make sure that they still accomplish what they are intended to.

After all, the purpose of the law is to make sure that adults are not victimizing children, and I fully support that. After all, we cannot have teachers and family members using their advanced intellect and maturity to prey upon children. Where I think the law needs to be looked at, especially in Florida, is that the child’s promiscuity, or the accused adult’s belief that the child was of age, cannot be used as a defense.

For example: You meet a woman at a bar. The bar clearly has a sign at the door that reads “No one under 18 admitted.” There is a bar employee checking ID at the door. A woman buys the two of you a drink, and you see the bartender card her when she buys it. You wind up leaving the bar with her, and things escalate to the point where she spends the night at your apartment, where you have sex. Later, it turns out that the girl was 15 years old, and was using a fake ID.

Under Florida law, you cannot even mention that fact in your defense. Why is that? The law in Florida says:

794.021 Ignorance or belief as to victim’s age no defense.—When,
in this chapter, the criminality of conduct depends upon the victim’s
being below a certain specified age, ignorance of the age is no defense.
Neither shall misrepresentation of age by such person nor a bona fide
belief that such person is over the specified age be a defense.

Far fetched? That is what happened to Morris Williams, a case that I have blogged in the past. This girl: 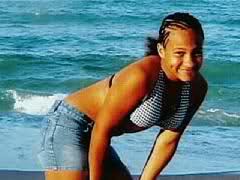 Was only 13 years old in this picture, a picture that she used on her MySpace page in 2008 to claim that she was a 19 year old divorced woman. She doesn’t look 13, does she? Williams had sex with her, and he went to jail. he wasn’t the first. A year earlier, another man was sent to jail for having sex with the same girl.

This is where we need to have a conversation: The purpose of the law is to protect the innocent from being preyed upon by the more experienced. What the law fails to address is what happens when the one doing the preying with all the experience is the child…

Your scenario happens for more often then people think. 15 years ago I was called to jury duty for a very similar situation.

Legal adult in an no-juvenile bar, bouncer at the door carding, etc — he takes her home, ends up parked out front of her place. Got to 2nd base before Daddy came out and asked why are you touching my 16 year old daughter.

Statutory rape charges pressed — for some reason I wasn't very sympathetic to the prosecution and was challenged for cause.

The other aspect we need to look at is the maturity of 'children' versus their ages. Heck, I know some people in their mid/late twenties that are not as mentally or emotionally mature as kids in their teens.

Calendar age is a shortcut for making decisions but shouldn't be the only factor.

This is a good point. That under age children are in fact sometimes the initiator of these relationships is a sad fact, but it's a fact.

That is different conversation that society should have, but in the mean time people who lack intent to violate the law should not be punished.

Florida took intent out of the code years ago.

@ Angus: No, they didn't. The law quoted above is an exact quote of the statute as it exists today. You can look it up yourself: