I am tired of my governor kissing Obama’s Ass

Governor Christ’s office announced today that Obama’s programs have saved or created 33,218 jobs in the state of Florida in the first quarter of the year.

That is perplexing to me, since the Agency for Workforce Innovation claims that in March of 2010, Florida saw 12.3% unemployment, which is the highest it has been since 1970. 1.1 million out of Florida’s 9.2 million workers are out of work. Florida’s total nonagricultural employment in March is 7.1 million, down 4,000 jobs from the previous month and down 149,600 jobs from a year ago.

In fact, the only jobs added to the economy have been government jobs. Maryland, Pennsylvania, and Virginia all saw gains, but that is only because they border Washington, DC and the new government workers can’t afford to live in the crime ridden cesspool that is our nations Capitol. The government reports that nationwide payrolls increased by 162,000. The report forgets to mention that over one out of every three of those jobs are temporary census jobs. 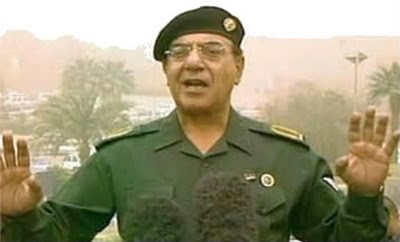 Baghdad Bob apparently has a job in the Obama or Christ administration. All is well. The economy is improving.
People who have read this post: 227
Categories: Uncategorized