Obama has a few records under his belt:

He beat GW’s record in that more soldiers have been killed in Afghanistan in 2009 than during 5 years of the Bush administration COMBINED (2001-2005).

and now, his latest record: the worst ratings of any president at the end of his first year: 49% approve and 46% disapprove of his job performance in the latest USA Today/Gallup Poll. 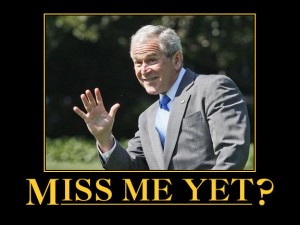