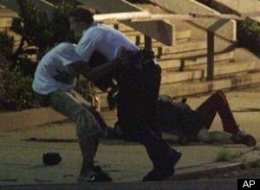 Secret Service officers have subdued two men who refused to get out of the street as President Barack Obama’s motorcade was returning to the White House. The men, who were using profanity, were charged with assaulting a police officer and failure to obey a lawful order.

When Bush visited Portland, Ore., for a fundraiser, protesters stalked his motorcade, assailed his limousine and stoned a car containing his advisers. Chanting “Bush is a terrorist!”, the demonstrators bullied passers-by, including gay softball players and a wheelchair-bound grandfather with multiple sclerosis.

One protester even brandished a sign that seemed to advocate Bush’s assassination. The man held a large photo of Bush that had been doctored to show a gun barrel pressed against his temple.

“BUSH: WANTED, DEAD OR ALIVE,” read the placard, which had an X over the word “ALIVE.”

Protesters slashed the tires of several state patrol cruisers and leapt onto an occupied police car, slamming the hood and blocking the windshield with placards. A female police officer was knocked to the street by advancing protesters, badly injuring her wrist.

The angry protest grew so violent that the Secret Service was forced to take the highly unusual step of using a backup route for Bush’s motorcade because the primary route had been compromised by protesters, one of whom pounded his fist on the president’s moving limousine.

Yet people accused Bush of trying to be a dictator.